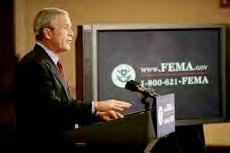 President Bush Thursday called for a National Day of Prayer on Friday, September 16, reminding the nation that it must come together to stay strong for the time of recovery ahead.

“I ask that we pray – as Americans have always prayed in times of trial – with confidence in His purpose, with hope for a brighter future, and with the humility to ask God to keep us strong so we can better serve our brothers and sisters in need,” he said.

The call for a day of prayer follows recent visits by the president to impacted Gulf Coast states where he met with victims and commended faith-based groups for their relief work as part of a wider effort by Americans.

As government and private relief agencies continue to work at the local and national level, Christian groups have also been active in ministering to the physical and spiritual needs of the victims.

Efforts to provide aid by the Salvation Army and Southern Baptist Disaster Relief, in addition to thousands of other churches and ministries around the nation in the immediate aftermath of the Hurricane have already helped to feed hundreds of thousands of people.

Meanwhile, Christian prayer ministries have been active on the spiritual front.

Jim Weidmann, vice president of the National Day of Prayer Task Force based in Colorado Springs said that the organization was in the process of mobilizing its network of 6,800 members around the country to hold local observances on the 16th in addition to ongoing prayer for the victims. He also noted that presidents have historically called for prayer in times of national need.

“When you take a look at our history, presidents have done this repeatedly: Roosevelt with the bombing of Pearl Harbor, Bush with 9/11 and now another catastrophe,” he said.

“God promised that if we come to Him, He will hear our prayers. With Katrina, we can help people with the physical, but with prayer, God moves in the hearts,” Weidmann said.

Karen Randau, a spokeswoman for the Presidential Prayer Team, a Scotsdale, Ariz.-based ministry, that has an online membership of 2.8 million people says that the organization will be holding a virtual prayer rally geared specifically for the day of prayer on the 16th in a way similar to past rallies for last year’s fall election and President’s Day for the last two years.

People will be able to sign up online and designate a specific hour when to pray. The site also includes biblically-based prayer resources to help.

The group has been active in prayer for hurricane victims. It recently called for people to make web forum postings regarding what tangible things people were doing to help in hurricane recovery efforts. Randau says the site received a great response only hours from the start.

On Tuesday, NDOP Task Force Chairwoman Shirley Dobson released a list of several prayer topics for hurricane relief, including: prayers to ensure safety and health of hurricane victims and their rescuers; prayers for family members anxiously awaiting news of their well being; peace in the midst of chaos; prayers for relief groups; and for citizens to “selflessly open their hearts and homes to the victims.”