News Update — Je’Rod Cherry will be interviewed on the Jim Rome Show around 1:30 p.m. (EST) today (November 25). It can be heard in the Cleveland area on WKNR, 850AM, but can be heard around the country on a variety of stations or online at http://www.jimrome.com/home.html. 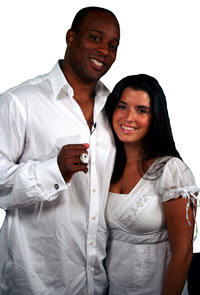 More than $138,000 has been raised for needy children around the world as the days wind down to the deadline to participate in the raffle to win Je’Rod Cherry’s Super Bowl ring. (Deadline to enter at http://www.netraffle.org/ is 9 a.m., Thursday, November 27.) Je’Rod was moved to give up the ring, which was won in the New England Patriot’s win over St. Louis in Super Bowl XXXVI, following a presentation last July at Momentum East, the annual Grace Brethren youth conference. Among the organizations that will benefit are Asia’s Hope and Feed My Starving Children along with charities in the Boston and Cleveland areas. (At right are Je’Rod and his wife, Samua, who are members of Grace Church, a Grace Brethren church in Macedonia, Ohio, Jason Haymaker, pastor.)

Below is a story that appeared yesterday (November 24) on the NFL website. More stories about the effort can be found at http://fgbcworld.com/.

For this former Patriot, charity has a (very) nice ring to it

Je’Rod Cherry sat through the slide show transfixed by the haunting images on the screen.

One by one, the eyes of so much pain and sorrow from a world away seemed to peer right into his very soul. Through photographs and narration, he took in horrifying stories of a little boy, on his deathbed, with a vulture literally circling in the background; of families trying to survive on two dollars per month; of children forced into sexual slavery.

He knew he had to do something. The problem was abject poverty in places like Africa, Cambodia, and Thailand. The obvious solution was money.

Then another idea came along.