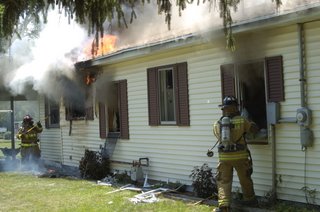 The home of Dean and Summer Avey at 108 Maple Street, Winona Lake, Indiana, was destroyed by fire about noon yesterday.(Al Disbro photo)

Summer had gone to water the flowers for her vacationing father- and mother-in-law, Tom and Sandi Avey, and upon returning home saw flames and smoke shooting out of the rear of the house. The Dean Aveys live about two blocks from the Brethren Missionary Herald Co. building and the Winona Lake Grace Brethren Church.

Dean Avey, who along with his wife, the former Summer Shipley, is an alumnus of Grace College, has his own information technology firm called RedwoodIT and he works with a number of clients including Grace Brethren International Missions and Grace Brethren North American Missions.

Tom and Sandi Avey, who were on vacation in North Carolina, have returned and will be housing the Dean Avey family temporarily. Dean and Summer Avey have two small children and are expecting a third.