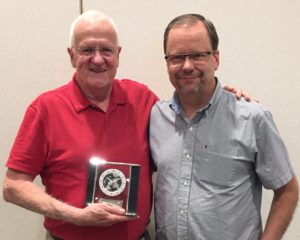 The first-ever ‘Relentless Pursuit of the Least-reached Award’ was awarded during to Larry DeArmey, veteran missionary with Encompass World Partners, during the Central Focus Retreat on Monday evening, October 2.

Dave Guiles, executive director of Encompass World Partners, presented the award to acknowledge a lifetime of outstanding service in evangelizing, discipling, and training leaders. Larry and his wife, Vicky, served in France and Spain, and Larry carried on an extensive itinerary ministry in Chad and Haiti.

It was part of the beginning of two days away for Grace Brethren leaders from the midwest. Meeting at the Maumee Bay State Park Lodge and Conference Center, the sessions are led by Clancy Cruise, executive director of the Fellowship of Grace Brethren Churches, and pastor of Grace Church, Marysville, Ohio. 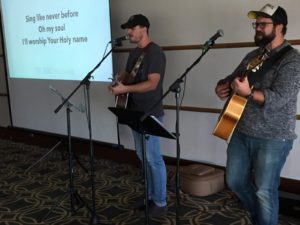 Worship is being led by Wade Rininger and Erik Jensen.

The theme is “Apprenticeship.”

Clancy opened the first session with a discussion of what apprenticeship means and asked for stories of apprenticeship in their churches. Following dinner, participants broke into small groups, where each talked about the particular mentor who impacted him or her the most and how to access an apprentice culture in the local church.

The retreat continues through Wednesday.