DeArmeys Honored for 37 Years in Missions 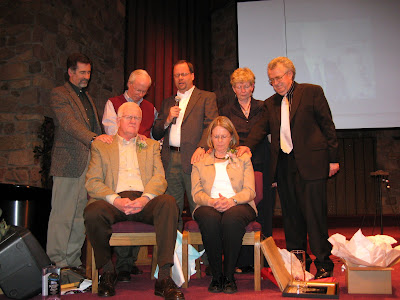 Larry and Vicki DeArmey (seated) were honored this Sunday, April 13, at the Winona Lake (IN) Grace Brethren Church for 37 years in European missions service with Grace Brethren International Missions. The first 32 years were in France, and the final five were in Madrid, Spain.

A reception and ceremony were emceed by former GBIM missionary Kip Cone. A number of tributes were given, including a video tribute from the DeArmeys’ European missionary colleagues.

Gifts were presented from the Winona Lake church and from the Women of Grace organization, and those attending had opportunity to express their thanks and appreciation to the DeArmeys. In addition to church friends and family, there were also representatives from the Grace Brethren Church in Columbus, Ohio, where the DeArmeys will be moving to continue their recruitment and encouragement ministry with Grace Brethren International Missions.