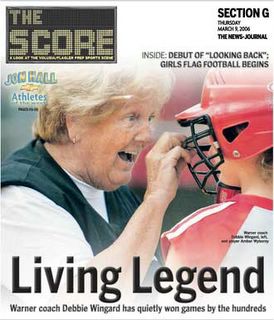 SOUTH DAYTONA — If you need Debbie Wingard to find a bunch of pictures of herself coaching over the past three decades, good luck. And if Debbie Wingard’s career record is something you’re curious about, pull out the yearbooks and start digging – because she doesn’t exactly have that info sitting around, either.

That’s because in Wingard’s mind, she shouldn’t be the center of attention.

It’s not that the Warner Christian volleyball and softball coach doesn’t have pictures. Oh, she has hundreds of pictures – captured memories of her 28 years coaching at the school. When it comes to details, just ask her about No. 11, the young lady with a ponytail that donned an Eagles softball cap in that picture from the 1979 team. Anything you want to know about that kid, Wingard can tell you – where she went after Warner Christian, what she has become.

Maybe it’s that kind of mothering and mentoring that has led Wingard to her 659 career victories in those two sports – 342 in volleyball and 317 in softball. There were also 12 district championships and a trip to the final four in 1990 in volleyball.

“It’s nice,” Wingard said. “I think it’s more of an average total. It’s because I’m old and I’ve gone on for years.”

Wingard and her husband Dave came to Volusia County in the mid-1970s. The coach was born in Ohio and later lived in Warsaw, Ind. She went to Ball State University for her undergraduate work, and married her husband in 1968.

After Dave’s tour in the military came to an end in the early part of the 1970s, he applied to the highway patrol in three states – Florida being one of them. They eventually settled in the Daytona Beach area, and Debbie took a position with the YWCA.

Two years later, she was at Warner Christian, teaching and coaching like she’d done in years past at high schools and small colleges. She’s never left, and thousands of kids have benefited from it.

“She made everybody feel special,” said Dr. Angela Sehgal, who played for Wingard for four years until her sophomore year of 1982, before transferring to Seabreeze. “Everybody feels like you’re part of the team, regardless of the talent level.

And you’re going to have a good time. It was just a lot of fun; I reflect on those times and just smile. There was also the religious aspect; she really walks the walk.”

Sehgal, who is the Program Director for Athletic Training and Sports Medicine at Florida State, credits Wingard for planting the athletics bug in her. She recently wrote a book called “Where It Hurts and Why.”

Tammy Wolgemuth Young was a player for Wingard until 1992, and her feelings about Wingard are similar to Sehgal’s.

“That number (of total wins for Wingard) is not surprising, but it is a high number,” Young said. “But every sport she coached, she put her heart into. If we had a bad year, we knew the next year was going to be a good one…She was a very personal coach, not just one who showed up to practice. She was an all-day-and-every-part-of-your-life kind of coach.”

Wingard’s felt the same way about her sophomore-year mentor in high school – physical education teacher Bede Wierick. Up until that year, Wingard had strongly considered a career in nursing, but she caught the bug of mentoring from a teacher who had passion. That’s what kick-started her love for her career.

“Well, it’s a very satisfying job,” Wingard said. “Obviously there are ups and downs. It’s wonderful when you have all-state pitchers that walk in, and you’re in good shape, and you’re reaping the benefit of people who’ve gone to club volleyball and softball and travel ball and all. And obviously there are times when it’s tough, too.”

Getting Wingard to mention some of her top players is like getting a mother to rank her children. Good luck. Several names came to mind, but she admitted she couldn’t mention everybody she’s proud of. On-the-field ability was great and all, but the personalities are what the coach remembers best. Developing a 200-strikeout pitcher is one part of the job, but making sure that same pitcher was nurtured off the field was more rewarding.

“They are the daughters she never had,” said boys basketball coach Neil Braly, who was the athletics director at the school back in 1977 when Wingard was hired, and whose daughters played for her. “She was the first one to really get the women’s program going at the school.”

Wingard, 61, could have retired a year or two ago and nobody would have thought any less of her. She does hint at some changes in her routine in the next year or two, but stops short of saying it’ll be a full-blown retirement.

“As long as I have the passion and I enjoy it, and I feel like I’m going to be able to make a contribution, I’ll stay,” Wingard said. “In another year, it’s going to be 30 years, but as long as I can do the job, I enjoy staying.”

Coming from a lady who just pitched batting practice recently, it looks like Warner Christian might want to plan on Wingard being around a while longer.