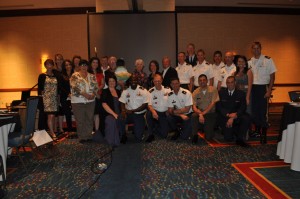 With dedication, distinction, courage, and commitment, more than 50 men have represented the Fellowship of Grace Brethren Churches as military chaplains. They stand on a legacy that has been built through the years.

These men have felt the call to share the message of God’s never-changing love to a unique culture. They have dared to hold their weeping wives and children, say goodbye, and then board ships and airplanes to go to strange and sometimes hostile environments. They have done so that they might touch the lives of many who do not know the peace that comes from knowing a Savior who loves them and wants to walk with them. They have served among many who have never darkened the door of any church.

Eight Grace Brethren men have served during Operation Desert Storm and the Gulf War in both the Iraq and Afghanistan theaters. … All of the chaplains have been highly decorated for their service in both peace and war.

Grace Brethren chaplains have served with distinction and have had the honor of being placed in positions of key leadership at nearly every level of command. To be selected to be the senior chaplain of a divisionis a tremendous honor and few are granted such an honor and responsibility. At least three have served at that level.

Grace Brethren chaplains want nothing other than to be men of God with the message of hope and salvation in Jesus Christ in the midst of our nation’s fighting forces. They not only are deserving of the honors that have been given to them by military commanders but are also worthy of the continued prayers and support of our Fellowship. There are soldiers,sailors, airmen, and Marines living and dead whose lives have been forever made whole because of the faithfulness of these heroes who have served the cause of Christ in very difficult circumstances.

I also pay tribute to their families who have been no less than heroic in their commitment to live the gypsy life of the military family. Theseunsung heroines and heroes have been willing to keep the home fires burning while husbands and fathers have been away on isolated and sometimes dangerous tours of duty.

Thank you for your prayers and support for all of those who have so valiantly served and continue to serve God, Country, and our network of churches.

Pray:
* for the chaplains as they serve in a unique culture;
* for their strength physically, emotionally and spiritually;
* for courage and steadfastness to get them through the tough times; and
* for their families, who need grace, patience, and closeness to be able to weather and grow from the military environment.

Excerpted from an article by Dr. John W. Schumacher, CH (COL) USA, Retired, the Chaplain Endorsing Agent for the Fellowship of Grace Brethren Churches, which appeared in the November-December 2010 issue of FGBC World magazine.

Military Chaplains in the Fellowship of Grace Brethren Churches