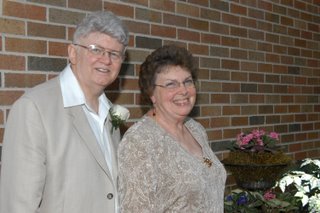 Today is the 50th wedding anniversary of Jesse and Gladys Deloe of Winona Lake, Indiana. Jesse and the former Gladys Mighells were married in Randolph, New York, on June 29, 1956.

He has also been moderator and vice-moderator of the FGBC, including chairing its constitution revision committee. He has been an overseer, teacher, and moderator at the Winona Lake Grace Brethren Church, where the Deloes are members. The Deloes have recently been active in founding and launching Grace in Action, a non-profit organization to assist churches with economic and community development.

Jesse and Gladys, who is a reflexologist and former piano and school music teacher, have two sons and three grandchildren. Christopher and his family live in Sylvania, Ohio; and Jonathan and his family live in Warsaw, Indiana. The Deloes’ children held a festive Open House in honor of their anniversary this past Saturday at Winona Lake Grace Brethren Church.