Denlinger is MCC Pitcher of the Week 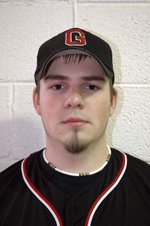 WINONA LAKE, IN – Grace College senior Nate Denlinger (Mason, OH/Mason HS) was named Mid-Central Conference Pitcher of the Week after guiding the team to a 3-1 win over Goshen College last Friday, completing a doubleheader sweep of the Maple Leafs.

Denlinger pitched 5 1/3 innings, allowing just two hits and scattering three walks. He also struck out two batters and only allowed one runner to reach second base through the first five innings.

The win was critical for the Grace baseball team as it evened the team’s conference record at 2-2 early in the year. In two starts this year, Denlinger is 1-0 with a 1.86 ERA in 9 2/3 innings.

Denlinger went into the current season needing just 13 innings as a senior to rank among the top 10 most durable pitchers in the college’s history. He ranked third on the team in complete games with four last year and was second in innings pitched.

Denlinger is the son of Ned and Kathy Denlinger of Mason, OH. Ned is pastor of the Mason Family of Grace, a Grace Brethren church in the suburbs of Cincinnati, and is also quite active in GraceinAction which is assisting The Happy Church in Jackson, Kentucky.

Nate Denlinger also plays golf at Grace. He is majoring in computer information technology and is a Resident Assistant at the college.