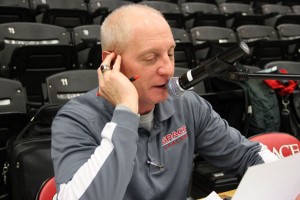 Paul DeRenzo is the public address announcer for men’s basketball games at Grace.

The website for the Crossroads League, the athletic conference of which Grace College is a part, includes a story about Paul DeRenzo, a long-time Grace College staff member who has served almost as long as public address announcer for men’s basketball games at Grace. Paul and his wife, Donna, attend the Winona Lake, Ind., Grace Brethren Church (Bruce Barlow, lead pastor). A portion of the story appears below. Click here to read the complete article.

Serving Grace College Since 1987: Paul DeRenzo, “the Voice of the Lancers”

Paul DeRenzo is a preacher’s kid who grew up in Detroit, Michigan. He has been married to his wife Donna for 36 years, whom he met in high school at age 15. The couple has three girls and five, soon-to-be six grand kids.

DeRenzo got a job at Grace College as the Director of Food Service in 1987, a job he held at Grace until 1996, after spending 12 years in Detroit serving as a restaurant manager. DeRenzo also started grad school at Grace Seminary in ’87 and graduated in 1994.

As if his role as Director of Food Service and attending grad school weren’t enough on his plate already, DeRenzo also started as a backup public address announcer for men’s basketball games at Grace. During his time as backup, which began in ’87, DeRenzo ran the shot clock and would step in and do the game clock when needed for the Lancers. He would also get two or three shots on the PA each year. This was not his first experience doing the PA as he had done the PA at a Christian school prior to arriving at Grace.

DeRenzo took over the PA duties on a full time (volunteer) basis for basketball in 1995.