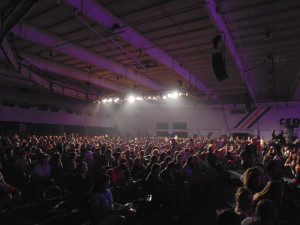 Events claimed a calmer tone during tonight’s session of Momentum 2016. Offering plates were passed through the rows in support of Destiny Rescue, LIFE Scholarships, and Urban Hope ministries. The Jordan Howerton Band played a few softer- though still powerful- chords to introduce Afshin Ziafat and his message on devotion in this year’s theme of YOURS.

Devotion is a word that speaks to Ziafat’s personal testimony. He grew up a Muslim who had a Christian English tutor in Houston, Texas. This tutor gave him a New Testament Bible, which he would open ten years later when he pulled it out of the bottom of his closet. A few weeks later, at an event similar to Momentum, he would dedicate his life to Christ. And for a year and a half, Ziafat would hide his Christian faith from his father, until his father made him choose; him or Jesus. Ziafat chose Jesus. 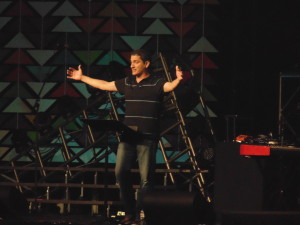 “Salvation is a free gift, but there is a cost to following Jesus.” Ziafat proclaimed in earnest tonight. Jesus’ calling of us goes beyond the altar call of this morning’s session, he also pointed out. He cornered the students about their devotion in following God, AFTER the ’emotional hype’ of Momentum fades. What’s faith look like, day-in and day-out? Ziafat used the example of Noah in Hebrews 11:7 to show how faith receives God’s Word, obeys God’s Word, and how faith perseveres and influences.

Ziafat states how that we were made for the fullness of God; as a chosen race of every tribe, tongue, and nation. This is a calling that goes beyond this morning, this week, and into all the days of our lives. Because when the hype had died down and the ‘dry’ times come, that is when our faith really matters. Many prayers tonight weren’t only for the week ahead. They were for the weeks to come as well.

“For whoever wants to save his life with lose it, but whoever loses his life for me will find it.”