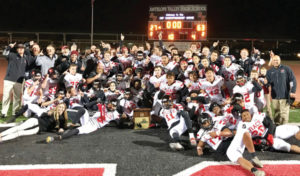 The Lancer’s older brother, Darrius Vukobradovich, a former Grace Brethren safety who helped the team reach the section title game in 2015, told Jauqine to loosen up a little.

“The last couple of games, I was kind of tight and overthinking stuff trying to make plays,” Jauqine Vukobradovich said. “He just told me to trust in my athletic abilities and go out there to do what I can.”

Darrius played his best in the biggest games; he snagged three interceptions against Mary Star of the Sea in the 2015 postseason opener.

The younger Vukobradovich brother followed in Darrius’ footsteps: Jauqine, a senior safety, snared three interceptions against Antelope Valley on Dec. 1 to help Grace Brethren capture the Division 8 championship, 63-27. He also had a 70-yard touchdown run that broke open the floodgates in the second quarter.

“He told me, ‘If you trust yourself, you’re going to make plays,’” Jauqine said of Darrius. “It helped me in a big game.”

The section crown is Grace Brethren’s (12-2 overall) third overall and first since the school won it all in 2004. The Lancers also won an eight-man section title in 1999.