Do it With Joy: The Story of Cassie Harris

Cassie Harris is never too shy to tell anyone that she’s from Alaska. Follow her around the Grace College campus, you’ll notice her huge smile, sunny disposition, helpful attitude, and that she’s probably the only one using sign language to sing along to the lyrics of the song being played in chapel.

Grace College commencement was May 13, and the Kenai native was one of the 561 people who receive diplomas – hers will be a bachelor of arts in Journalism and Bible, a degree obtained in the standard four years, no more, at the age of 27. Why does she stand out among the 2017 graduates?

For starters, Harris only has an eighth-grade education but received her GED at the age of 17. Medical complications at birth made it difficult for her to stay in school and maintain her health. Born with cerebral palsy, she had language issues and motor skill deformities. (Early on, she learned to communicate via American Sign Language, which she still considers her first language.)

At age 12, she was diagnosed with chronic progressive epilepsy. In 2005 and 2006, Harris underwent several brain surgeries, which simultaneously alleviated and aggravated the epilepsy symptoms, she says. A Vagal Nerve Stimulator implant in 2007 has allowed her to be medication free.

In 2012, Harris met Viki Rife, executive director of Women of Grace USA (WGUSA), and began writing for WGUSA’s magazine Spectrum. She asked Rife about being trained as an editor. Rife encouraged her to attend Grace College and study Journalism. “She said I could use my role with WGUSA’s editorial team to fulfill the Applied Learning Internship expected for graduation from Grace.”

It took another year, but in 2013, Harris stepped into Grace’s Lancer Country where she would begin college classes. She also began working with the Women of Grace USA office, where she frequently writes for their blog, womenofgraceusa.wordpress.com.

Her disabilities, which she says are “rather invisible,” have not kept her down. “I limp, and my right hand is weaker and spastic, but for the most part, my needs as a disabled person go unnoticed because I look normal,” she notes.

One doctor told her there could be limitations as a result of the brain surgery. “They’d developed the assumption that learning languages was dangerous for epileptics,” she recalls, “and I had just enrolled in Greek. I passed two sessions of Greek, which was all that was required for graduation.” Still, she finds that math and sciences are more difficult.

Starting college later in life also has given her a different world view, but she says that it “makes friendships rich, precious and fun, but rather difficult at times.”

Her physical journey has often paralleled her spiritual path. “It’s been the biggest spiritual challenge letting God put His story in various places,” she adds. “I was brought up to not draw attention to myself, to not assume I’m in the spotlight and do it with joy.” 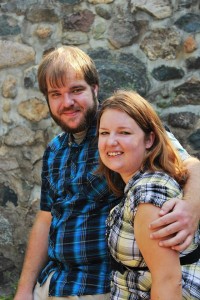 Cassie and Peter will marry following graduation from Grace College.

While getting ready for college graduation is big enough, Harris will marry Peter Rayl (pictured at right) a week later in Akron, Ohio. “My husband will be attending seminary at Grace, so my plan is to support him through that endeavor. I have a few ministry/job positions in the works and should be finding out about those by June.”

Rayl will be serving as youth pastor at the Grace Brethren Church in Leesburg, Ind. (Tim Sprankle, pastor). Harris says that her supportive role with the young people has become incredibly important. She also will continue working with WGUSA and furthering her ministry experience there as well.

Follow Cassie’s next chapter in her life by following her blog here. –– by Destiny Blake

Editor’s Note: Destiny Blake is a graduating senior at Grace College, Winona Lake, Ind., and is from Onekama, Mich. She was an intern in the GraceConnect office during Spring semester, and she was Cassie’s roommate during much of their college careers.

[Connect] Send Cassie a note of encouragement at RaylCassie@gmail.com.