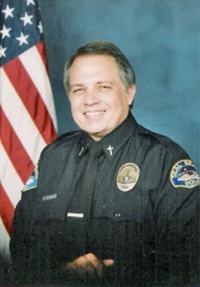 From pastor Don Shoemaker of the Grace Brethren church in Seal Beach,California, who also serves as a police chaplain:

October 12 started out as an ordinary day–sermon study, hospital visitation.  While in that hospital room I got a call from Seal Beach’s police dispatch center asking me to respond to a location where multiple gunshot fatalities had just occurred.  I came on the surreal scene with its command center, law enforcement and fire personnel from agencies all around, and media helicopters above.   It is a typical part of quiet “Old Town” Seal Beach, about four blocks from my church and across from the Pacific Inn, where some FGBC leaders have stayed.  I was there for the next seven hours, talking to and helping families and friends of (unconfirmed) victims and being useful (or standing around, of which there is plenty in such situations).

Seven hair salon workers and customers were dead, an eighth was hospitalized and survived (her daughter, deceased, was doing her hair).  A man simply sitting in his car nearby was shot and killed.  St. Anne’s Church lost two members; one member of our church was having lunch close by–it could have been him in his car.

The killer drove past our church and was stopped by an heroic motorcycle officer two blocks east.  Remarkably, there was no shoot-out but rather a surrender (the killer had three guns and was wearing body armor).  He and his ex were in a nasty custody dispute and now his son is without a mother and has a mass murderer as a father.

Then came the vigils, the funerals (I conducted the funeral for the salon owner), TV interviews, TV cameras at Sunday worship, the police department debriefings, the community information meeting, City Council…and more to come.

I would never have imagined, within the final three months of my senior pastorate, I would encounter this string of events.  Our church has risen to the challenge with its prayers, ministering worship services, volunteerism, counseling, necessary adjustments and concern.

How to process all this will take a long time.  At this point, I rejoice in the providence of God and his protecting arm through the civil magistrates.  Our community (“Mayberry by the Sea”), its businesses and our fire and police departments are forever changed.  The need for law enforcement and fire chaplains should be enhanced in everybody’s minds.

I offer you below the address I gave at a candlelight vigil the following evening, held outside the salon.

Living and Loving and Looking Back after Mass Murder

They got up Wednesday morning and went to earn an honest living or do something they enjoyed. Maybe they planned their afternoon or just made some spontaneous decisions. No amount of planning or decision-making could prepare them and their friends and loved ones for what would unfold. And now these eight beloved community members are gone and one more remains in critical condition.

“Why, God? Why?” God gave us commandments for life and well-being, and one man chose to break them. He did not love his neighbor as himself. He did not do to others as he would have others do to him. He did not obey, “Thou shalt not murder.”

And now the rest of us are left to grieve and struggle with the present and future and pick up the pieces of shattered lives.

I take hope in the God who is present in our hour of tragedy (Psalm 10):

“You, O God, do see trouble and grief. The victim commits himself to you;
You are the helper of the fatherless.
You hear, O Lord, the desire of the afflicted,
You encourage them and you listen to their cry.”

With this assurance in mind, we pray as the psalmist prayed:

“Arise, Lord! Lift up your hand, O God! Do not forget the helpless.”

What can we do? Our task is to support the families and co-workers, friends and neighbors who are impacted in the worst of ways. And to uplift one another.

Pray the “prayer St. Francis” and put it into practice:

My prayer is that God will be our encouragement and peace. May he wrap his arms of tenderness around all who mourn.

May he motivate us all to treat each day as significant, for it may be our last time to speak the word that should be spoken and give the gesture that should be made.