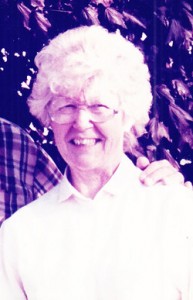 Word has been received of the death of former Grace Brethren missionary, Doris Evelyn Juday. Her obituary appears below.

Doris was born March 27, 1927 to Herman and Beatrice Schumacher in Huntington, Ind.

She graduated from Jimtown High School in Elkhart, Ind., and attended Grace College and Seminary in Winona Lake, Ind.

Evie was a born again Christian and was looking forward to meeting her Savior. She attended Calvary Baptist in Kenai and was a missionary to Africa. She spoke several languages and taught French. She was also a musician and soloist.

She was preceded in death by her husband, Rex Juday; parents, Herman and Beatrice Schumacher and brothers, James, Paul and Robert.

Evie is survived by her brother, John and wife, Martha Schumacher of Glendale, Ariz., and sister, Phyllis, and husband Rev. Bill Smith, Florida.


In lieu of flowers, memorial donation in her name may be given to the Calvary Baptist Church Building Fund, 208 Lawton Dr. Kenai, AK 99611. For questions, please contact Carol Titus at 283-3023.