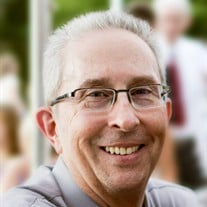 Pastor Douglas M. Forsythe, 69, is “absent from the body and present with the Lord” (2 Cor. 5:8). He unexpectedly departed on September 22, 2021, leaving behind his wife of 47 years, Deborah Manning Forsythe, and beloved daughter, Jessica Forsythe Martin, of Lancaster County, Pennsylvania.Doug was born in Columbus, Ohio, on January 9, 1952, to Thomas Moody Forsythe and Betty Miller Forsythe, both of whom preceded him in death. May their heavenly reunion be a glorious one.

Having graduated from Whetstone High School as Valedictorian of the Class of 1970, Doug turned down several scholarships to prestigious schools, choosing to work his way through Bob Jones University to begin his study for the ministry. He served there as a Graduate Assistant, teaching undergrad history while earning both his Master’s and Seminary Degrees.

In 1974, he married Debbie Manning (Anderson, Ind.) who was also studying for Christian Ministry at BJU. Debbie had been greatly influenced by her pastor in Anderson, Dr. Don Camp, and by Youth Pastor, Ron Halbert. God united Debbie and Doug with a singular life purpose of service to the God Who has revealed Himself through the Written Word of the Bible. They led their lives as Servant-Leaders, not self-focused, but giving Glory to God and “thinking of the things of others” (Philippians 2:4).

Doug was a faithful, gentle, and kind husband, loving Debbie “as Christ loved the Church and gave Himself for it” (Ephesians 5:25). In 47 years of marriage, he never once raised his voice in anger toward Debbie. Together they walked through many of this life’s troubles clinging to each other, realizing that “in this world you will have trouble, but be of good cheer, I have overcome the world” (John 16:33). Through faith in the Word, they believed that “God would never leave them or forsake them” (Hebrews 13:5).

In 1980, they were blessed by the arrival of their first child, Jennifer Christine Forsythe. Two years later, they discovered that she had Cystic Fibrosis, our nation’s leading genetic killer of children. Facing the tremendous time and energy commitment that this devastating disease brought to his family, Doug chose to set aside his own interests and hobbies to totally support Debbie in managing Jennifer’s daily care. He delivered the one-hour, three times per day, grueling process of chest percussion to clear Jenn’s lungs. Because of Doug’s faith, inner strength, servant’s heart, patience, kindness, and commitment, God enabled them to be an exception to the 85 divorce rate of Cystic Fibrosis parents.

Doug’s “peace that passes understanding” (Philippians 4:7) led him and Debbie to take the leap of faith to have a second child, and God blessed them with Jessica Cherie’ who was born without CF. With their family complete, the four of them faced many challenges in this life with the demands of ministry and the episodes of medical crisis. Doug remained the spiritual and physical rock that kept them all grounded. His faith and strength were demonstrated daily to his family and will be forever cherished.

Doug served his Lord and Savior, Jesus Christ, throughout his entire career. He was an astute Bible teacher. He exposited the Word of God through his preaching and teaching in a way that took seasoned believers deeper into spiritual truth, yet was clear and helpful to those who were new to the Word. He spoke extemporaneously and rarely relied on written notes.

Our family was devastated at the loss of Jennifer in 2006, but we are now so comforted to know that Doug and Jennifer are reunited together with the Lord. Debbie’s father, J. Ray Manning (Anderson, Ind.) and Jessica and Derrick’s baby, Charlotte, were also there to greet him.

Doug and Debbie had just one opportunity for a son-in-law, and God blessed them with the “gold” of Derrick Spencer Martin (Lancaster, Pa.) in 2011. What a joy and comfort to know he will stand by Jessica in her grief! May their children, Clara Rose (5), Ella Pearl (3), and Spencer Douglas (9 months) be comforted in the loss of their “Pappy” and be influenced spiritually by the Godly heritage he leaves to them.

Doug’s last gift of service to honor the Lord and bless others was to donate his kidneys to save two lives. Both of his recipients are doing well, and their families are thankful and blessed by his departing gift. Debbie was privileged to direct one of his kidneys to his former church receptionist—which is a special blessing.

Doug’s only sibling, Lawrence Forsythe, Retired Major USAF, will miss their times together playing board games and cheering for the OSU football team. His wife, Linda, and their children, Dr. Matthew Forsythe (wife, Gretchen, children Karis and Lucy), Dr. Michelle Forsythe, and Juli Forsythe Piovesan and husband, Dennis, completed our small Forsythe family. We will all cherish our last all-family gathering in July and thank God that He made it possible.

Debbie’s mother, Jean Manning (Anderson, Ind.), and her only sibling, Duane Manning (Graham, N.C.), also enjoyed a wonderful time with Doug and Debbie in Indiana this summer along with Jessica and her family. Those memories will be a blessing as we all comfort one another in Doug’s absence.

Doug’s sudden and unexpected call to his Heavenly reward leaves a terrible hole in the lives of Debbie, Jessica, the rest of the family, many friends, and those who have benefited from his ministry. We are comforted only by the truth of Scripture found in 1 Thessalonians 4:13–18:

“But I would not have you to be ignorant, brethren, concerning them who are asleep, that you sorrow not, even, as others who have no hope. For if we believe that Jesus died and rose again, even so them also who sleep in Jesus will God bring with Him. For this we say unto you by the word of the Lord, that we who are alive and remain unto the coming of the Lord shall not precede them who are asleep. For the Lord himself shall descend from Heaven with a shout, with the voice of the archangel, and with the trump of God; and the dead in Christ shall rise first; Then we who are alive and remain shall be caught up together with them in the clouds, to meet the Lord in the air; and so shall we ever be with the Lord.”

The funeral service may be viewed on Sunday, October 3, at 3:00 p.m. online at the link: www.gracepolaris.org/watch