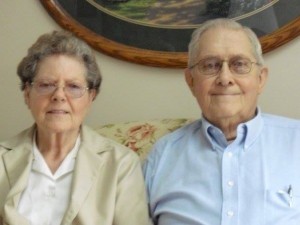 Here’s a sweet story about retired Grace Seminary professor and administrator Dr. Bill Male and his wife, Ella, from the Kosciusko County Community Foundation. It’s one of hard work, determination, and innovation. A portion of it appears below. Click here to read more and to view photos.

The Sweet Taste of Desperation – How Sara Lee™ Pies Were Born

During World War II, in the suburbs of Chicago, a baker struggled to keep his bakery going after two of his workers got drafted and two went to work in war factories. In an act of desperation, the baker began making only two kinds of pies a day, instead of his usual 8-10 pies a day. He would make enough of those pies to last a week, freezing whatever he didn’t need immediately. The next day he would make two different kinds of pies and freeze what he didn’t use immediately, thus providing him with an efficient way to have a nice variety of pies at all times. The baker had also been experimenting with frozen pastries for several years.

One very busy day before Thanksgiving, two of his best customers were frustrated that the bakery had run out of mincemeat pie. The baker’s wife, who ran the store, convinced her husband to sell the women frozen mincemeat pies and tell them how to bake them. The women were thrilled with the results and it wasn’t long before frozen pies and pastries were being sold on a regular basis. The baker’s wife came up with the name “Frigid-Dough” and demand for the product grew so that they needed to expand. First, they opened a second store front. Then, they began distributing throughout the Chicago area. Eventually, Frigid-Dough moved to a larger two-story building on Madison Street in Chicago, and had 11 franchises throughout the country.

The baker in this story was E. Gordon Male. His wife was Mary. His son, E. William (Bill) Male, was his after-school bakery helper. Bill and his wife, Ella, are generous donors to the Community Foundation. They reside in Winona Lake.

Click here to read more and to view photos.