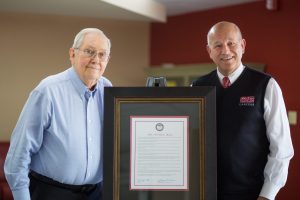 Grace College and Seminary and the Fellowship of Grace Brethren Churches has lost a significant figure in its history with the passing this morning of Dr. E. William Male, former academic dean, professor, and administrator. Male died in Michigan, having recently moved there from Grace Village Retirement Center to be closer to one of his daughters.

In the 34 years he served Grace Schools, Dr. Male held a variety of teaching and administrative positions in the college and seminary, including twelve years as academic dean of the college, eleven years as dean of the seminary, and two years as the acting dean of the seminary’s west campus. For eight years, while serving as academic dean of the college, he worked on a Ph.D. degree at Indiana University, which was awarded in 1968. In 1971 he founded the first of the annual institutes for Christian school administrators and teachers, for which Grace has become internationally known in the Christian school movement. After his retirement from his academic ministries at Grace, he served as a part-time planned giving officer for the school from 1989 through 1993.

During his years of service at Grace College and Seminary, Male also served as an interim pastor of a number of churches. Dr. Male was a board member of the Brethren Missionary Herald Company from 1957 to 1996, served on the board of the Warsaw Christian School from 1960 to 1978, the Lakeland Christian Academy board from 1974 to 1983, and was one of the founding board members of the Association of Christian Schools International in 1978. In 1983, the ACSI board granted him the title of Board Member Emeritus. At the annual meeting of the Association of Grace Brethren Ministers in July, 2009, he was honored with their “Lifetime Achievement” award.

Dr. Male and his wife, Ella, distinguished themselves not only with their service, but also with their philanthropy. Their generous gifts resulted in naming the alumni suite in the Manahan Orthopaedic Capital Center and the building that houses Grace Seminary, graduate counseling, and the new worship arts major. The board of trustees named the building for Male at its March, 2014, meeting.

A memorial service is planned at Grace Village Retirement Center for Monday, January 9, at 2 p.m.  A viewing will be held on Sunday, January 8, from 2-4 p.m. at Fedpath-Fruth Funeral home in Warsaw. — from grace.edu