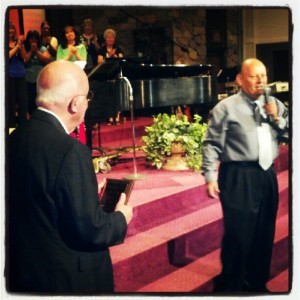 Dr. Homer A. Kent, Jr., professor emeritus of Greek and New Testament and former president of Grace College and Seminary, Winona Lake, Indiana, was honored yesterday by Ed Lewis, executive director of CENational, for Dr. Kent’s faithfulness to the Word of God.

Lewis presented a plaque and read a citation in the morning services of Winona Lake (IN) Grace Brethren Church on Sunday, September 2, 2012.  In presenting the award, Lewis noted that Kent came to Winona Lake as a teen when his father, Homer Kent, Sr., left his pastorate in Washington D. C. to become part of the faculty and administration of the newly-formed Grace Theological Seminary.

After completing high school in Indiana, Kent earned his bachelor’s degree from Bob Jones University and then went on to graduate studies, earning degrees including the Th.D. from Grace Theological Seminary.

Over his lifetime, Dr. Kent has taught thousands to love, memorize, and exegete the Word of God. He has written commentaries on 15 New Testament books, many of them published by BMH Books of Winona Lake. He was one of the translators of the New International Version.

But most remarkable, Lewis noted, is the fact that as a teen, Kent determined to read through the Bible every year of his life, which he has done. Lewis thanked Dr. Kent for his faithfulness through the years, and for the guidance he has provided in understanding and applying the scriptures.