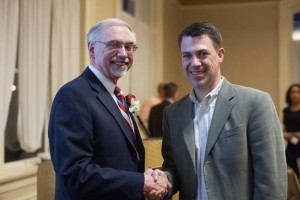 A community appreciation dinner in honor of Dr. Ronald E. Manahan was hosted by Dr. Dane and Mary Louise Miller at Westminster Hall on May 6, 2013. During the evening, Manahan was recognized for 36 years of distinguished service and 20 years as president of Grace. The Board of Trustees of Grace College and Seminary, on behalf of the students, faculty, and staff of Grace College and Seminary, in expression of its deepest gratitude, officially presented the re-naming of the Orthopaedic Capital Center the “Ronald E. and Barbara J. Manahan Orthopaedic Capital Center at Grace College.”

Sen. Jim Banks of the Indiana State Senate presented a resolution from the State of Indiana along with a flag that was flown over the state capital. Banks also presented a proclamation from the City of Warsaw, and a proclamation and resolution from the Town of Winona Lake declaring it “Ron Manahan Day.” Jean Northenor, retired executive vice president of Lake City Bank, presented a letter from the state Supreme Court. Northenor spoke on Manahan’s mobilization of the community to pursue the Westminster restoration project, which was the first time that Grace collaborated with the community on a project of such magnitude and that involved such broad representation.

Dr. Dane Miller, founder and board member of Biomet, Inc. spoke on Manahan’s efforts to mobilize the orthopaedic community around the Orthopaedic Capital Center project, the first collaboration between competing orthopedic companies to benefit the community as a whole. David Johnson, president of BioCrossroads, spoke about Manahan’s efforts as an ambassador in championing the cause of orthopaedics statewide. Dr. Patrick Kavanaugh, executive director of The MasterWorks Festival, provided special music for the evening.

Vitoux said, “Dr. Manahan will be remembered as a godly, Holy Spirit-driven leader who left his indelible print on all those he encountered through his soft-spoken words, and by making the community and many of the local Orthopedic businesses feel a part of the school during the years of his presidency.”

Manahan will take the fall semester as a sabbatical and then assume the role of senior advisor to the president at Grace College and Seminary during the academic year 2013-2014.