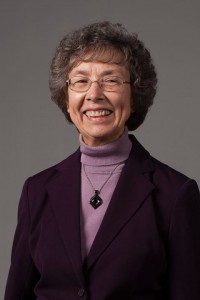 Dr. Paulette Sauders is about to complete her 50th year teaching at Grace College. Only three others have reached this esteemed milestone at Grace (Dr. Homer Kent, Jr., Ron Henry and R. Wayne Snider), but Sauders is the first faculty member to accomplish this while still actively teaching full-time.

Sauders graduated from Grace College in 1964 with a bachelor’s in English Education. After teaching for a year at the Akron Bible Institute — where she met and married her husband, Chuck — she was appointed professor of English and Journalism at Grace in 1965. Over the years, she earned her master’s in Literature from Saint Francis University and her doctorate in English Literature from Ball State University, where she became a C.S. Lewis scholar.

Sauders has presented several academic papers on Lewis, most recently at the Frances White Ewbank Colloquium on C.S. Lewis and Friends as well as at Huntington University for the 50th anniversary of the death of C.S. Lewis. Several of her papers were published in a collection of essays on C.S. Lewis called “Inklings Forever.”

For 35 years, Sauders has taken Grace students on a two-day trip to Stratford, Canada, to attend plays at the Shakespeare Festival Theatre, and since 1995, she’s taken students to England over spring break to visit London, Oxford, Windsor, Stratford, Bath, Stonehenge/Salisbury and Wales.

In addition to serving as a faculty member in the Languages, Literature and Communication Department (where she’s taught 17 different courses), Sauders taught in the Grace prison program for 16 years and served as a leader for Women of Grace for 40 years. Sauders has been the chair of the department since 2003 and for four decades has served as an advisor to the school newspaper, “The Sounding Board.”

Bill Katip, president of Grace College, presented Sauders with an engraved, swivel desk chair at the Employee Recognition Banquet on April 29, in honor of her 50 years of service. He also presented her with a framed portrait, which will be hung in Philathea commemorating her service. After reading several tributes from Sauders’ former students and sharing about the legacy she’s built at Grace, Katip said, “I hope you know how much we admire you and how appreciative we are of all you have contributed over the years.”

Sauders will continue to chair the Languages, Literature and Communication Department and teach full time. Here’s to another decade!