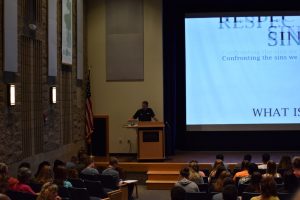 Tiberius Rata teaches students the respectable sins and how to identify them.

Rata referenced the “respectable sins” in Jeff Bridge’s book by the same name. He defined sin as any lack of conformity to the moral character and laws of God. He outlined the main respectable sins as pride, lack of self-control, anger and gossip then taught students how to identify the sins by asking questions. Do you disregard the advice of others, Rata asked as an example.

God requires repentance and change, then he will faithfully forgive the sin, be it action, word, or thought. Rata referenced 1 John 1:9 for God’s promise. He said, “Get to the root of the problem.”