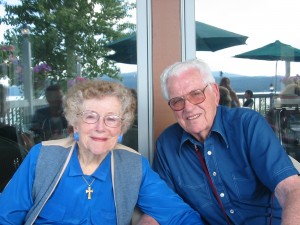 Samuel Wayne Beaver, D.D., age 97 of Coeur d’Alene, Idaho, but a long time resident of Winona Lake, Ind. and Orange County, Calif., entered into his rest with his Lord and Savior Jesus Christ on April 6, 2016.

Wayne was born on June 2, 1918 in Ganges, Ohio, the third child of Reuben and Mary Margaret (Hartman) Beaver. Wayne attended Wheaton College (Wheaton, Ill.) where he enjoyed involvement in the Philathea Society, as well as competing in both football and basketball; but would eventually earn his B.A. Degree from Kent State (Kent, Ohio), majoring in History. Wayne went on to study at Dallas Theological Seminary (Dallas, Tex.), and Grace Theological Seminary (Winona Lake, Ind.) where he met his wife.

Wayne married his life partner Dorothy Wolf on August 7, 1943 in South Gate, Calif. Dorothy preceded Wayne to join her Savior on March 28, 2014. Wayne and Dorothy were preceded in death by their fourth child, Phillip Ned Beaver who died on June 2, 1953 in the Central Africa Republic where Wayne and Dorothy spent 27 years as Missionaries.

Wayne and Dorothy began their missionary ministry in June 1944. Wayne established the Bible Institute, focused on training local African pastors, and was involved in the translation of the English Bible into the Sango language. In 1971 Wayne directed the National G.R.O.W. Evangelistic Campaign which saw over 300,000 converts come to Christ. During his years in Africa, Wayne was an avid hunter and enjoyed telling stories of his adventures, which included at one time being charged by an angry bull elephant. Upon retiring from active missionary work, Wayne and Dorothy settled in Winona Lake, Ind., where Wayne became a member of the faculty of Grace Theological Seminary and the head of the Missions’ Department of the Seminary. Wayne later went on to start the Graduate School of Missions, and would eventually receive an Honorary Doctorate of Divinity in 1974.

The Beaver family will not be holding a funeral service for Wayne, but is planning a memorial service on April 17 in Coeur d’Alene, Idaho. In lieu of flowers, and in keeping with Wayne and Dorothy’s love and support for son Dan’s ongoing missionary outreach in the Philippines, the family is asking that donations be considered for The Wayne and Dorothy Beaver Memorial Ati Children’s Ministry c/o First Love International Ministries, P.O. Box 15836, Loves Park, IL 61132 • email: firstloveinternational@comcast.net • phone: (815) 229-3065• web: firstloveinternational.com/ministries/ – and navigate to Donate / Ati Tribal Children.