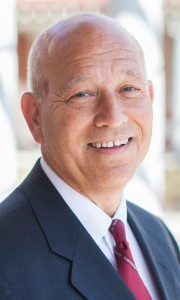 The faculty, staff, and board of trustees of Grace College and Seminary are excited to welcome former provost Dr. William J. Katip as the president of Grace College & Seminary. He assumed this new role following Dr. Ronald E. Manahan’s final day on May 11.

As Katip steps into his new role, he is implementing some structural changes to the institution’s senior leadership team. Manahan will assume the role of senior advisor to the president during the academic year 2013-2014, taking some time in the fall semester as a sabbatical. Dr. Jeff Gill was named vice president and dean of the Seminary and School of Ministry Studies, and joins the Grace College and Seminary senior leadership team.

“Dr. Manahan made sure the college and seminary remained true our mission through drastic changes,” said Katip. “I commit to that same fortitude, also acknowledging that our methods must be adaptable. Higher education is in line for radical changes and we have to pray for wisdom daily to find new ways to express it.”

Katip received a B.A. in Bible and Psychology from Grace College, an M.S. in Clinical Psychology from Purdue University and a Ph.D. in Higher Education Administration from Michigan State University. His professional background includes 39 years of college administration (15 at Grace), teaching and counseling experience, and serving as provost of Grace College since 2007.