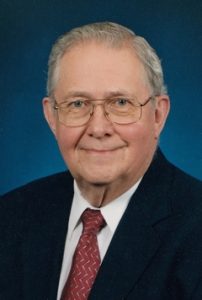 Dr. Ernest William “Bill” Male, 89, of Tecumseh, Mich., completed his earthly journey and stepped into eternity with his Savior on Thursday, January 5, 2017 at Cambrian Memory Care Center in Tecumseh, Mich.  He lived the largest portion of his life in Warsaw and Winona Lake, Ind.

He was born on November 7, 1927 in Streator, Illinois to Gordon Male and Mary (Morrell) Male. On September 3, 1950 in Mendon, Mich., he was married to Ella Beth Kauffman, she survives in Tecumseh, Mich.

Dr. Male was a resident of Kosciusko County, Ind., since 1959 where he was a member of Winona Lake Grace Brethren Church of Winona Lake, Ind.

After completing his Master of Divinity degree at Grace Theological Seminary, Bill pastored Grace Brethren churches in several states. However, he spent most of his career as a professor and administrator at Grace College and Theological Seminary. Bill was a staunch supporter of Christian education, and his desire to encourage Christian school teachers and administrators led to the development of the nationally-recognized Summer Institutes and Master of Arts programs for educators held on the campus of Grace College and Seminary. His work with the Summer Institutes provided an opportunity for him to serve as one of the founders of the Association of Christian Schools International (ACSI). Bill also had a passion for helping minority students achieve advanced academic degrees, and many of the students he helped are now teaching and preaching around the world.

Bill was a member of the Indiana District Fellowship of Brethren Ministers, National Fellowship of Grace Brethren Ministers, past member of Warsaw Kiwanis Club, and an honorary Phi Delta Kappa member. Bill greatly enjoyed traveling personally and professionally. His trips took him to many countries in Africa, Europe, Asia, and the Middle East. Through the years, his other interests included flying, magic tricks, stamp collecting, and bird watching.

The family will receive friends on Sunday, January 8, 2017 from 2:00 – 4:00 p.m. at the Redpath-Fruth Funeral Home, 225 Argonne Road, Warsaw, Indiana.  A private family graveside service will take place at Oakwood Cemetery of Warsaw.

Memorial donations may be made in Bill’s name to Grace College and Seminary, 200 Seminary Drive, Winona Lake, Indiana and would be appreciated by the family.