The newsletter for the Eagle Commission, the ministry which links Grace Brethren congregations with military chaplains around the world, has been released. Below are a few items of note from the newsletter, which is sent by John W. Schumacher, Ph.D., Chaplain (Colonel) USA, Ret., endorsing agent for the Fellowship of Grace Brethren Churches. 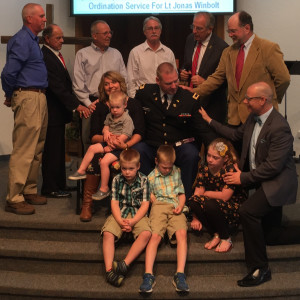 Jonas Winbolt has been accepted as a chaplain in the U.S. Army. In October, he was ordained to the ministry at Grace Fellowship of Alta Loma, Calif. (Roy Halberg, pastor). Several pastors from Southern California participated in the event.

It is a privilege to announce that Chaplain Jonas Winbolt was selected in the November Chaplain Accessioning Board to be accepted as an active duty chaplain. He is now waiting for the assignment people in the Army Chief of Chaplain’s office to assign him to a post in the near future. Jonas, Lisa, and their children will need your prayer support as they close out their present ministry and civilian life and move to a new location where they will encounter a military lifestyle with all the new and unfamiliar things that entails. They will be so appreciative of your support in prayer for them. Jonas was ordained to the Gospel ministry in October at Grace Fellowship of Alta Loma, Calif., where Roy Halberg is pastor. (Feature photo is Chaplain Winbolt, left, with Pastor Halberg.) 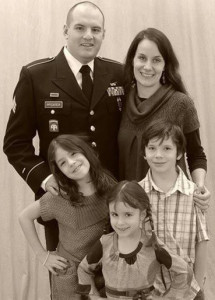 Not all our chaplains are on active duty. There are reserve, National Guard, and VA (Veteran’s Administration) chaplains in our group, too. We have just received an update from Jeremy Pfeister, a reserve Army chaplain, who has started an excing ministry in addition to his reserve duty assignment. As the result of seeing an enormous need for a chaplain in the Kensington neighborhoods of Philadelphia where he lives, and where Urban Hope is, he has begun the Kensington Community Chaplain Services (a ministry of Urban Hope Community Church). He is providing counseling free for marriage and family issues as well as trauma and crisis counseling. He shares that they have already seen some healing take place in individuals and marriages. Please pray for Jeremy, Kaera, and their children (see photo at left).