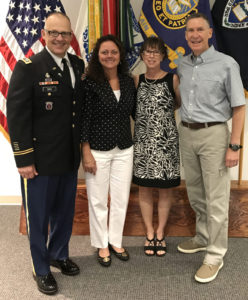 Mark Penfold, recently retired Grace Brethren chaplain with the U.S. Army, began his duties on June 1 as the chaplain endorsing agent for the Fellowship of Grace Brethren Churches. (Watch for a story on GraceConnect about Mark and his ministry.) He’s already visiting making the rounds of active chaplains. He recently filed this report.

New FGBC Chaplaincy Ministries Endorser, Mark Penfold visited Chaplain Justin and Becca Hayes at Naval Station Mayport, Fla. Pray for Justin and Becca as they are part of a small chaplain team at the base with incredible opportunities to minister to sailors and their families. Justin is assigned to the USS Farragut, a modern destroyer. (In the featured image at the top, Penfold and Hayes are with the captain and senior officers of the Farragut on the quarterdeck.)
Chaplain Richard Hurst along his wife Star recently graduated from a five-month course at the U.S. Army Chaplain School, Fort Jackson, S.C. Pray for the Hurst’s as his next assignment is in South Korea.
Social Share