Earning Eagle Scout, A Continent Away 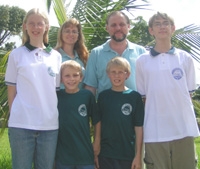 Jacob lived in Winona Lake, IN, with his parents for three years while they were finishing preparations to go to Brazil. Jacob traveled with his scout troop 715 to the Grand Canyon in 2001, to Kentucky Lake in 2002, and to Yellowstone national park in 2003. His Eagle project was to fix up a nature trail for Grace College in Winona Lake.

Patton earned 57 merit badges and served as patrol leader, assistant patrol leader, and was the troop’s chaplain’s aide for two years. Scoutmaster Dick McCleary communicated with Jacob via e-mail during the last year.