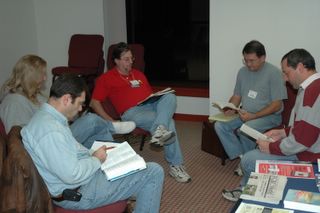 Poring over Psalm 119 in small groups was the evening activity at the East Focus Retreat, which began today at 4 p.m. at Sandy Cove Retreat Center on the Chesapeake Bay in North East, Maryland.

About 55 are in attendance–the retreat concludes Wednesday morning.