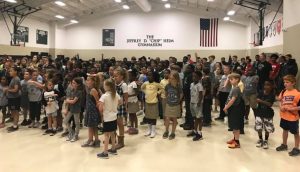 The gymnasium at Grace Christian School in Blacklick, Ohio, has been named in honor of Chip Heim, who is retiring after 35 years on staff at East Side Grace Brethren Church, who sponsors the school.

As legacy seems to be the word of the year this year, I cannot think of a more fitting way to end the year than by honoring the legacy of Pastor Chip. I have known Pastor Chip for 11.5 years, as pastor, counselor, spiritual advisor, colleague, teacher of my children, and most importantly, friend.

As a pastor, I have watched him lead people in moments of their greatest joy: marriage, child dedications, baptisms – including my own – and I have watched him walk alongside people in their deepest sorrow as they said their earthly good-byes to those they love. I have sat through countless sermons as he took God’s love letter and spun it into stories that inspired our love and understanding of God’s relentless love and mercy.

As a counselor and spiritual advisor, he has walked with me when the path has been rocky, and when I had more questions than a book of “Why?” and he did so with endless empathy and patience.

As a colleague, I have watched him earn the respect of his students while simultaneously being able to get “on their level.” It is a delicate balance for a teacher, and he does it flawlessly. Students talk endlessly and fondly of all the socials, the 8th grade movie nights, and the “real” class discussions in Bible class. Our students always return to visit, and 100% of the time, they MUST see Pastor Chip.

As a teacher to my children, I do not have enough gratitude to extend for the influence he has had in the lives of my children. As I spoke to my oldest about Chip recently, she used the word, “father figure,” and I found that apt as our students place their faith and trust so willingly into his hands, and under his tutelage, they flourish spiritually. “He just gets us…” one said, “…even though he is an adult, he still remembers what it is like to be our age,” and this means the world to them. From the personal letter he writes each and every 8th grader each year, to the singular word he gives them that tells them who he sees them to be…he shows them he “sees” them and he captures their hearts, and because he captures their hearts, he captures their minds, and is able to, once again, pour God into each of them. It is a priceless gift as a teacher, to a parent, and a student.

But, most importantly, over the last 11.5 years, he has become a friend.

A legacy is not leaving something FOR people. It is leaving something IN people, thus leaving them better than you found them. In turn, these people pass on what you began – because positive influence does not end with your effect on a singular person. Just as dropping a stone in the water does not just affect the point of entry, like ripples on the water your words, your actions, your love for others extends and multiplies exponentially, for your influence does not stop with the people in front of you, but flows out to influence the people in front of them. And, so, your legacy, and your gift, goes on…well played, Pastor Chip, well played.