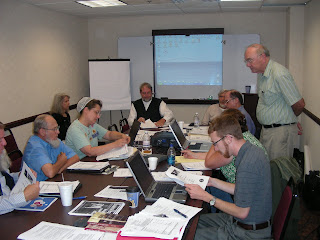 Efforts to digitize Brethren publications, including the Brethren Missionary Herald, took a step forward Monday as the Brethren Digital Library Forum met in Brookville, Ohio. (The Herald magazine was published from 1939 to 1995.)

Last fall, the group met for the first time to explore a joint effort to put their various publications in a digital (and searchable) format. There are more than 30 publications that have been produced by the various groups that trace their roots to Alexander Mack and 1708. Some publications were first printed in 1871, with many others being released throughout the 20th century. The purpose of the effort is to capture the information in the publications before hard copies deteriorate as well as making making the various pieces searchable.

The group formally organized on Monday as the Association of Brethren Repositories, a name chosen to reflect a purpose greater than just archiving publications and they will pursue legal organization. Larry Heisey of the Brethren Heritage Center in Brookville, was chosen as president. Jeanine Wine, archivist at Manchester College, is the vice president.

They also viewed preliminary quotes from three vendors and discussed specifications for the project. Future meetings will focus on fund raising, which publications to digitize first, and how the files may be accessed. They will next meet on January 12 at the Brethren Heritage Center in Brookville, Ohio.