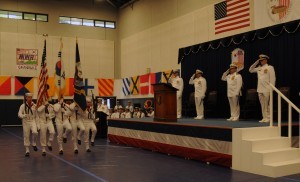 Navy Chaplain Lou Urban (far left on stage) participates in a Change of Command in Korea.

Eight Grace Brethren military chaplains are expected to be at the annual conference of the Fellowship of Grace Brethren Churches to be held July 16-20 in Cincinnati, Ohio, according to Larry Chamberlain, president and CEO of the Grace Brethren Investment Foundation, which sponsors the Eagle Commission.

During the annual Chaplain’s Luncheon, on Friday, July 16, the men will report first-hand how God is working among the brave men and women of the U.S. military.

“Many tell us that this time of honoring our Chaplains is the highlight of the FGBC annual conference,” says Larry in a recent letter to friends of the Eagle Commission, the Grace Brethren ministry that supports and encourages the chaplains. (Click here to register for conference or to purchase tickets for this luncheon.)

Among other news that Larry reports in his month letter to the Eagle Commission, given as prayer requests for the chaplains:

For more details about the Eagle Commission, click here.