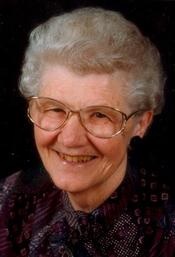 She was a pastor’s wife and a homemaker, and a member of Winona Lake Grace Brethren Church. She has been a resident of Winona Lake, Indiana since 1978, moving here from Puerto Rico where she spent 19 years as a missionary and a lifetime in Christian ministry.

Her funeral service will be conducted on Wednesday, January 30, 2013 at 5:30 p.m. at Redpath-Fruth Funeral Home, 225 Argonne Road, Warsaw, Indiana and officiated by Chaplain Bryan Benjamin and Pastor Bruce Barlow.

Memorial donations in Elaine’s name may be directed to Grace Village Retirement Community, 337 Grace Village Drive, Winona Lake, Indiana 46590 and would be appreciated by her family.