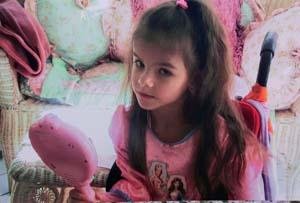 A couple from the Ellet Grace Brethren Church in Akron, Ohio (Jonathan Carey, pastor) have been attracting wide attention from the Akron area. Last week the Akron Beacon-Journal newspaper ran a four-part series on Sue and Chuck Minick and the handicapped little Russian girl they have adopted. Some of the donations that have come in response to the story will be used to make the Ellet church building more handicap-accessible. Here are some excerpts from Kelsey’s story and the response (family photo, from the Beacon-Journal).

Kelsey Minick sat beside her mother in their Suffield Township home and tore open an envelope. Kids like getting mail; it makes them feel important. That’s why the 5-year-old feels like royalty.

Since a series of Beacon Journal articles about the little girl concluded last Sunday, the Minick family has been showered with cards, gifts and money.

“Ask your mother to buy you a nice outfit for Easter,” an 83-year-old great-grandmother penned inside a card that accompanied a $100 check. “You are a brave little girl.”

Kelsey’s mother, Sue, shook her head. The generosity of strangers has been overwhelming.

By the final installment of the four-day series, the family had received more than 150 telephone calls at their home, mostly from folks they have never met.

“The mail, the calls, the e-mails — wow! There are just so many kind people,” Sue said, staring at the most recent stack of cards from well-wishers.

Kelsey, who was born in Russia, arrived in Akron in January 2002. By the fall of that year, she was a paraplegic. Her first adoptive father, Gerald Hyre, who is serving 16 years in prison, severed her spine. She will never walk again

Last month, doctors at Akron Children’s Hospital performed an operation to make Kelsey continent and free of infection of the bowel and bladder. She will have many surgeries in her life as a result of the abuse.

Meanwhile, though, she is doing well. She’s back to using her wheelchair to chase her sister, Jamie, and quietly plays with Miranda, a sibling who is deaf.

Sue and Chuck Minick, who are grandparents, have three grown children, a foster child, and four adopted girls who are all victims of child abuse or neglect. Their oldest adopted daughter, Amanda, was left a paraplegic at the hands of her biological father.

Readers have been so moved by the Minick story that they have offered complimentary tickets to the ballet, invited the family to visit an Amish farm with exotic animals, volunteered to buy an electric wheelchair, and left Easter baskets on the porch of the family’s Victorian-style home.

Sue and Chuck Minick are grateful for the community’s generosity. They will use the money they’ve received on Kelsey.

But because the little girl isn’t in need of major financial assistance, the couple suggest that any future donations be sent, in their daughter’s name, to a fund that could benefit many.

The church that the family attends, Ellet Grace Brethren, is 85 years old. Because it has no outside ramp for those in wheelchairs, Amanda is unable to attend, and Kelsey is carried into the building.

Contributions to the church’s building fund for a ramp, or to build a new church that would be accessible to handicapped people, should be sent to:

It brought tears to some readers, who were shocked at the brutality of the child’s abuse but also inspired by the child’s spirit and the determination of her new parents.

However, others found the Kelsey coverage too pandering and too soft. For them, human interest stories cannot and should not be featured over what they consider news of more substance and significance.

In case you missed it, the four-part series that ended last Sunday offered a moving and emotional look inside the lives of Sue and Chuck Minick, the Suffield Township couple who took in the little girl. And it gave you the sweetness of Kelsey’s sunny spirit, despite the prognosis of never again walking after her spine was broken by the man who adopted her from Russia.

Through the work of reporter Kim Hone-McMahan and photographer Paul Tople, you agonized with Kelsey as she battled terrifying nightmares, and then later as she endured painful medical procedures. You also realized the depth of the love and caring extended by the Minicks, who went to extreme lengths to bring the special child into their home.

One of despair and hope, pain and healing, abuse and love.

More of the Beacon-Journal articles and supporting material are no longer available online.