John Elliott, a community leader in Warsaw and Winona Lake, Ind., and a long-time supporter of Grace College athletics, was honored recently by members of the local Warsaw Breakfast Optimist Club and was presented with the Sagamore of the Wabash award. Elliott is moving out of state to be closer to family. A portion of an article from InkFreeNews appears below. Click here to read the complete story.

As Elliott Prepares To Relocate, Fellow Optimists And Friends Give Him A Sendoff 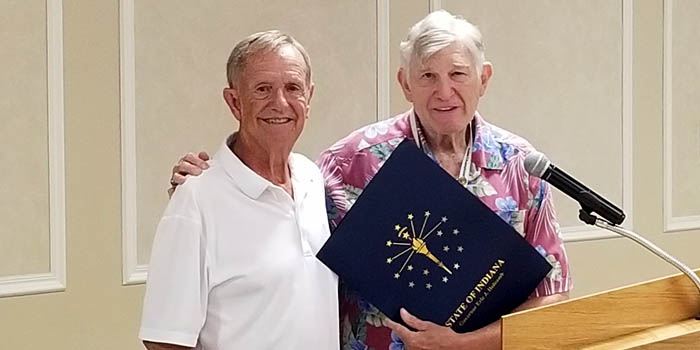 Members of the Warsaw Breakfast Optimist Club and others honored Elliott — who turned 75 on Wednesday — at the Shrine Building, making it clear how much he has meant to the community.

One of his closest friends, State Rep. Dave Wolkins, presented him with a Sagamore of the Wabash, a distinguished state award from Gov. Eric Holcomb.

Elliott was a longtime banker in Warsaw and retired from 1st Source Bank, but was lauded by many for his countless roles in the community outside of work.

Numerous people mentioned Elliott’s sense of “servant leadership” and his organizational skills that allowed him and others to accomplish so much with the Optimist club and countless community projects.