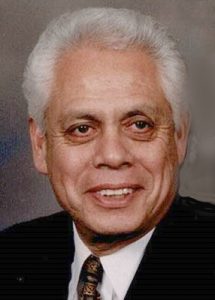 After enduring a long illness, Pastor Eloy S. Pacheco went home to be with his Lord on June 6, 2019. He is survived by Pat, his beloved wife of 54 years; his son and daughter-in-law, Bryan and Tammy, and Matthew, his treasured grandson.  He is also survived by his older sister Lucy (Tavo) and his younger brother Dan (Miriam).

In 1979, Eloy became the Care Pastor at the Chapel in Akron. For 28 years, he and Pat faithfully served in ministry there together, caring for folks as Christ modeled for His church. Eloy devoted himself to teaching the gospel, fellowship, prayer, discipleship, and helping those in need, whenever, however, and wherever such need arose. Doing so was his life’s privilege, mission, and joy.

Believing and knowing that all things work together for good for those who love God and are called according to his purpose, Eloy lived his life accordingly. He placed his trust in the Lord, and he is now reaping the eternal rewards for his faithful life.

The Pacheco family is so grateful and thankful for the loving care Eloy received from Danbury Woods and Crossroads Hospice.

Dr. David Burnham will conduct services Wednesday at 11 a.m. at The Chapel (in the Worship Center/main sanctuary), 135 Fir Hill, Akron 44304. Friends are invited for visitation from 10 a.m. until service time on Wednesday at The Chapel, and at Redmon Funeral Home on Tuesday from 2 to 4 and 6 to 8 p.m.. Burial Chestnut Hill. In lieu of flowers, memorials can be made to Crossroads Hospice, Burnham Ministries International, or The Chapel.