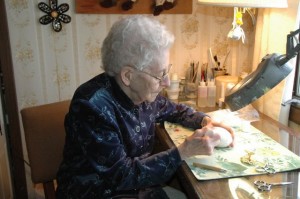 Emma Fretz was known for her egg creations.

The following article on Emma Fretz appeared on the front page of the March, 2006, edition of Senior Life newspaper, published in Milford, Indiana. It is used by permission of the editor-article and photos are by staff writer Tim Ashley.

Beautiful creations can be crafted using a simple raw egg. Such beauty can be found in the home of Emma Fretz, who lives on the edge of Warsaw.

Covering a span of 30 years, Fretz estimated she has crafted more than 8,000 works of art using everything from finch to ostrich eggs. What first started as a hobby has since grown into a small business, as well as teaching classes and hosting tour groups in her home, some of the tours being coordinated through the Kosciusko County Convention & Visitors Bureau.

This love and enjoyment of crafting artwork with eggs can be traced back to a trip to California in 1976. One afternoon during the trip, she noticed a tea set crafted using an egg sitting in s woman’s art studio.

“I had seen one of those before, but I thought that I would love doing this,” she said. “So I got a couple of egg crafting books and gave it a try.”

That same year, her husband, Walter, bought her a Dremel cutting tool as a Christmas gift. “I didn’t know how difficult it would be, but it was not as difficult as I thought,” she commented. “I tried a couple of chicken eggs first, then went to goose eggs and then to larger eggs (ostrich, etc.).”

After a couple of years, Fretz discovered the hobby was becoming something more than just a casual, once-in-a-while thing. So she purchased an air drill, which works off an air compressor, and now uses that as her main cutting tool.

The amount of time it takes to craft an egg varies depending on how detailed the final product is to be. She noted she can do about 20 necklaces at a time, which are made from smaller bird eggs. But some of the larger egg projects take much more time; in one instance it took her two weeks to finish a project.

“I usually do more than one at a time, because there is a lot of drying time involved,” she said. “I have to keep busy with something else while another one is drying.”

Fretz guessed 75 percent to 80 percent of her creations are her own ideas. The rest are taken from the designs of other egg crafters, which can be purchased at conventions or through catalogs.

The process of crafting begins, of course, with an egg. Some of the eggs have already been cleaned out on the inside, while others still have the contents inside which must be forced out after drilling holes on each end of the egg.

Generally speaking, the design is then drawn on the egg, the door is completed, some of the cutting is done, it is painted and a finish is put on it, which makes the egg shine. Next, the egg must dry for at least 12 hours, then the items are put on to decorate the outside of the shell. It is then painted on the inside and, depending on the goal, the inside is decorated with details as needed.

Fretz has created a variety of artwork, but does have her favorite themes. “I like the ones that pertain to my family and also the tiny beaded eggs,” she said. One example of an egg pertaining to her family is a Christmas house which, when opened, shows a living room and a fireplace. On the fireplace are stockings which have the names of each family member written on them.

She also takes her eggs on the road, traveling to conventions where other egg crafters as well as suppliers gather. One is March 18-19 in Rockford, Ill. Another is in early May in Muncie, though she will not be able to attend that one.

Most of her eggs are either sold at conventions or given away, she said. She estimated she has about 200 left, which are neatly displayed either on shelves or throughout her home.

“This is very relaxing to me and it is really fascinating,” she said. And she hopes to continue training others to enjoy egg crafting as much as she has.