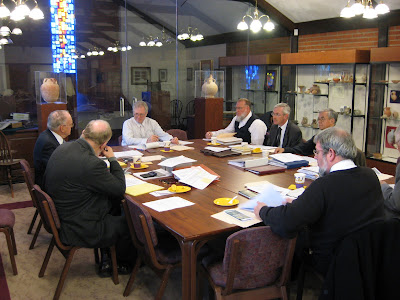 The final meeting of the Brethren Encyclopedia Board prior to the 300th anniversary celebration of the founding of the Brethren movement took place yesterday in the archaeology room of Ashland Theological Seminary in Ashland, Ohio.

Members of the board are comprised of representatives of six of the major Brethren groups descending from the baptism of Alexander Mack and his companions in the Eder River at Schwarzenau, Germany, in 1708.

The two-day celebration in Schwarzenau will be held Saturday, August 2 and Sunday, August 3, 2008, and has been being planned by the BE board for several years.

The closing event of the day will be a 4:30 p.m. gathering at the Eder River where a short service will be led by Michael Miller of the Old German Baptist Brethren and Terry White of the Fellowship of Grace Brethren Churches.