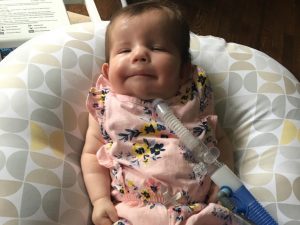 As soon as Jordon and Rhi married on June 3, 2017, they began praying that God would bless them with a baby. Three months later, they discovered they were expecting. Little did they know, God’s perfect plan would look much different than their own.

“When we found out I was pregnant, we were ecstatic to say the least,” Rhi says.

But Rhi and Jordon had a whirlwind pregnancy. At their 20-week ultrasound, their doctor shared news that made their world crumble.

Rhi says, “My regular OB came into our room and said, ‘There is a part of your baby’s brain that is measuring small. We have to send you to Maternal Fetal Medicine (MFM) for a follow-up.’ That was it! No explanation, no time for questions.”

At the appointment with MFM, Jordan and Rhi were blindsided. Emerson was diagnosed with Cerebellar Hypoplasia, and doctors warned Jordon and Rhi that Emerson might never walk, talk, or eat on her own and would likely have seizures.

“Then she gave us the option for termination,” Rhi shares. “She even told us which places we could go to have the abortion done, how much it would cost, and how long we had to ‘decide’ before it was no longer legal in the state of Ohio.”

But for Jordon and Rhi, termination was never an option.

“We knew in our hearts that Emerson was given to us by God and that we were chosen to be her parents for a reason,” Rhi says.

“I had severe polyhydramnios because Emerson wasn’t swallowing in the womb. If I had gone into labor on my own, I had so much excess amniotic fluid that the cord could have come out first and cut off her circulation,” Rhi says. 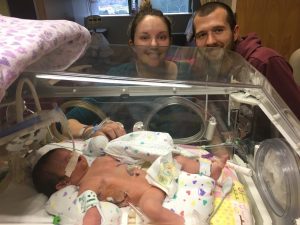 During the emergency C-section, Rhi hemorrhaged. Emerson was whisked away to Akron Children’s Hospital, where she immediately had surgery to repair her esophageal fistula. A few weeks later she had another surgery and an MRI. Her cerebellar hypoplasia had turned into PCH, which affects her breathing and basic function.

Rhi says, “My husband and I both remember reading about PCH when we received her initial diagnosis and praying that it wouldn’t turn into this, but God had other plans for Emerson. Emerson could live until she’s six months or 16 years…we don’t know.”

After 89 days in the NICU, Jordon and Rhi finally got to bring their sweet girl home.

“For now, we are adjusting to life at home,” Rhi says. “God has taught us to enjoy every moment we have with her and not to take anything for granted, whether it be taking her for a stroller ride or cuddling up on the couch to read her a story. Every day we have with her is a gift.”

[Connect:] To send a note of encouragement to the Rhi and Jordon, click here.