Esther Rupel, the leading authority on Brethren dress, has died. Those in the Charis Fellowship might recall her entries in the Brethren Encyclopedia. Her obituary appears below. 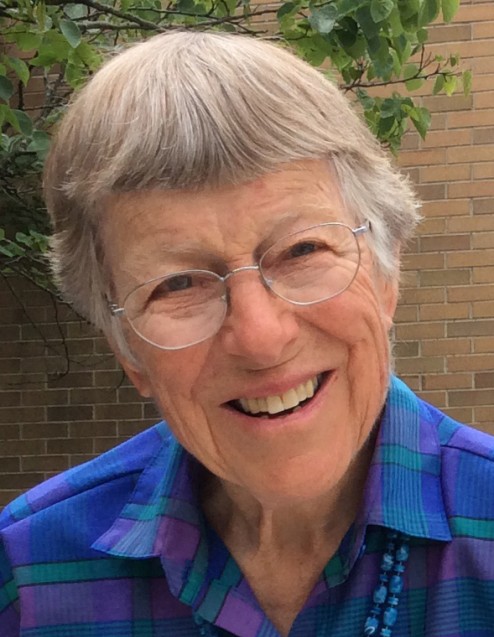 Esther Fern Rupel, age 97, died Monday, June 28, 2021, at Timbercrest Senior Living Community, North Manchester, Ind  She was born March 31, 1924, one of five daughters, to A. Byron and E. Edith (Rohrer) Rupel on the family farm near Walkerton, St. Joseph County, Ind. In her youth, Esther learned responsibility by gardening, doing chores, milking cows, and driving the team of horses. At age 12 she was baptized into the Pine Creek Church of the Brethren in Northern Indiana. When she left the farm, it had been in the family for one hundred years.

Esther graduated as salutatorian from Walkerton-Lincoln Township High School in 1943 and from Manchester College (now University) in 1947, majoring in home economics and minoring in art and in education. She received vocational home economics certification from Ball State Teacher’s College (now University). She taught in LaGrange, Ind., for nine years. In 1957 she received her Master of Science degree from Purdue University. She joined Purdue University’s faculty of the College of Health and Human Sciences, and retired after thirty-one years of teaching historical and cultural aspects of clothing and textiles. She was awarded the “Best Teacher Award” in the early years of her career. In 1971, she received her Doctor of Philosophy degree from the University of Minnesota. Her doctoral dissertation was titled “The Origin, Significance, and Demise of the Prescribed Dress Worn by Members of the Church of the Brethren.” As the leading authority on Brethren Dress, Dr. Rupel contributed entries to the Brethren Encyclopedia and enjoyed giving presentations on the subject.

Dr. Rupel was recognized as a 50-year member of the American Association of Family and Consumer Sciences and the Indiana Association of Family and Consumer Sciences and served both at the local and district levels. In 1998, she was recognized for 13 years of service as a member of the Manchester College Board of Trustees. Earlier, in 1975, she received the college’s prestigious Alumni Honor Award. Esther participated in international programs including a work camp in Germany and traveled, often with alumni and student groups, to Scandinavia, Russia, Morocco, Peru, Portugal, Spain, the Holy Land, China, Australia, New Zealand, Greece, Nigeria, Puerto Rico, the Panama Canal, and Schwarzenau, Germany, where she celebrated the 300th anniversary of the Church of the Brethren.

A lifetime member of the Church of the Brethren, Esther served locally as Women’s Fellowship president, song leader, choir member, Sunday school teacher, and church board chair. She served on the district church board and was a district moderator. She chaired the committee which planted the Christ Our Shepherd Church of the Brethren in Greenwood, Ind. She enjoyed helping with programming and activities as well as attending women’s camp at Camp Alexander Mack in Milford, Ind., and was a member of the inaugural Camp Mack Festival committee. She served on the building committee for the Manchester Church of the Brethren and is recognized for her major role in the design of the church kitchen. On the national level for the Church of the Brethren, Esther served on Standing Committee, chaired the nominating committee, and served twice on the local arrangements committee. She designed and created numerous church banners, many of which were sold at Annual Conference to support the “Art for Hunger” cause.

A life-long learner and teacher, Esther valued research, problem-solving, and innovation in the methods she employed in her classroom as well as in her home life. Relying on family qualities of creativity, discipline, and persistence, she worked to further others’ education and well-being. Her deep convictions for education motivated her to provide inspiration, advice, and encouragement to others, and even room and board for nieces and a nephew. Her practicality led her to develop a nationally appreciated mitten pattern that could be used both as a teaching instrument and as a useful gift or donation project.

In retirement, she continued her sense of responsibility for others’ education and well-being by directing her enjoyment of gardening and art to sell produce and flowers at the Farmer’s Market in North Manchester, with proceeds being donated to Heifer International and Manchester University student scholarships.

Services will be held Saturday, July 10 at the Manchester Church of the Brethren, 1306 Beckley Street, North Manchester, Ind. Visitation will be at 10 a.m. with the service following at 11 a.m. The family requests all attendees wear masks. Livestreaming of the service will be available at https://www.youtube.com/watch?v=ljfSzG6xpCU.  Interment will take place at 3 p.m. at the family plot, Eastlawn Cemetery, 209 West Center Street, North Liberty, Ind..