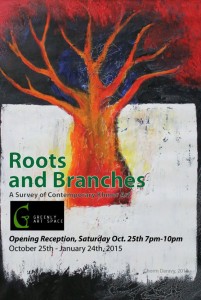 Tim Robertson, who with his wife, Jessica, is working among the Cambodian arts community in Phnom Penh, is part of an art exhibit that begins this month in the Long Beach, Calif., area. “Roots and Branches” opens with a special reception on Saturday, October 25, at Greenly Art Space, 2698 Junipero, Ave Suite 113, Signal Hill, Calif. It features work by artists living and working in Cambodia as well as artists of Cambodian descent living in Southern California. (The Robertsons serve in Cambodia with Encompass World Partners.)

Artwork for the show was curated by Kimberly Hocking (Greenly Director), Mao Soviet (artist and director of Make Maek Art Gallery in Battambang, Cambodia) and Tim Robertson (an American visual artist who spent the past five years working in Cambodia), according to the Greenly Art Space Facebook page, which announces the exhibit.

“The theme, Roots and Branches, revolves around origins and aspirations,” said Robertson. “We were looking for work in which the artists dealt with sources of strength and nourishment, aspirations, dreams and the future.”

Cambodia’s story has been a turbulent one stretching back over the past 50 years. The late 1960s through the ’80s were characterized by civil war, mass murder and displacement.

“That history has had a profound effect on those living in Cambodia and also Cambodian families who were forced to flee their homeland and settle abroad,” Robertson said. “The women and men sending work from Cambodia are some of the first artists their country has had in an entire generation. The artists living locally in California are part of the first several generations making a new start in a new place and beginning to express their unique perspective.”