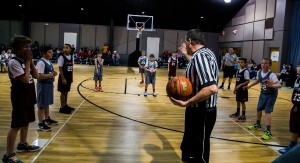 The Extension of Grace Church, Bath Campus, Akron, Ohio, uses the facility in part for sports ministries throughout the year. (Photo by Pete Valentine)

“God had put on our hearts to pursue multiplication. This was a version of multiplication that made a lot of sense to us,” says Ezra Wimberly.

Grace Church in Bath, Ohio (Jeff Bogue, senior pastor), recently opened a new building, called The Extension, located a few miles away from their original building. But it was meant to be a different kind of campus.

“The whole reason we opened The Extension is because we were running five services [at Bath Campus] and it was getting crowded,” explained Wimberly, who led the launch of The Extension.

“We knew that we weren’t really doing things to invite the community or hosting aggressive outreach events because we didn’t know where to put people on child dedication days or Mother’s Day. We had like 12 Christmas Eve services…ridiculous amounts.”

What’s so different about The Extension is that it is not a church plant, like some of the other Grace Church campuses. (In addition to their Bath campus, Grace Church also has campuses in Barberton, Medina, and Norton, Ohio.) The two primary purposes were for sports ministry and weekend services.

“Our vision was that anybody who goes to Bath can attend any service anywhere, anytime,” Wimberly explains. “The idea of planting campuses was so regular to us and our people that it was very difficult to conceptualize church services not on-site that wasn’t a different campus. It wasn’t a new church plant…just a different building and at a different time.”

They launched this past October and currently host two services there each weekend.

“People are receiving it really well,” said Wimberly. “Most of the time when people stop over there, what I get is, ‘I didn’t know what this would be like, but I prefer it. It feels like a smaller church.’ Even first-time guests say, ‘This is the church I’ve been looking for.’”

Located a mile or so closer to the metropolis hub of Akron than the original campus, The Extension has welcomed many new churchgoers, as well. The sports ministry has also opened doors for newcomers. The Extension, in addition to an auditorium, houses facilities for numerous sports, including a gym and locker rooms, and more in the works for the future. Opportunities for discipleship abound.

“We didn’t really want to have a league that was just full of Grace Church people. That’s part of why we’re doing sports ministry,” said Donny Varney, sports ministry pastor.  “We have launched 15 different sports ministry connect groups, and a basketball and cheerleading league. They came from everywhere. Forty percent of the children who were part of the league had nothing to do with Grace Church.”

“It definitely opened up a lot more opportunities for people to serve, as well…and people who are serving tend to own the mission in a deeper way,” continued Varney.

“[The sports ministry connect groups] help form a biblical community, but it’s in a format that is a lot less threatening than being in someone’s living room. [The participants] love the community…at the end of those weeks they say there’s the flavor of our life groups about. It is a significant bridge into Grace Church.”