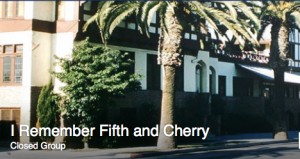 A Facebook group has been formed to help reconnect hundreds of individuals who attended the Grace Brethren Church in Long Beach, Calif., when it was located at the corner of Fifth and Cherry. Howard Mayes, whose father, Dr. Charles Mayes, was pastor when the building burned in 1964, and Gordon Austin, who grew up in the church, have created the site which is full of photographs and memories of the church in that era. “I Remember Fifth and Cherry” is a closed group, but interested individuals are encouraged to join and share their own stories and photos. (Click here for more information.)

Howard and Gordon write in the group description: “A church in Long Beach CA began in 1913 as the follow-up to a multi-week tent revival conducted by Louis Sylvester Bauman. In the years that followed it became a flag ship congregation of the Grace Brethren Fellowship. In the over fifty years after its founding it was led by only 2 senior pastors–the founder and his hand picked successor, Charles Webster Mayes. Literally hundreds of Christian leaders from many walks of life trace their Spiritual roots to ‘Fifth and Cherry.’ (Named for it’s almost bigger than life location in Long Beach CA.) When Dr. Mayes led in the establishment Brethren Christian Schools in 1947, another ‘ministry heritage’ was begun. … If YOU do, please sign in and share your recollections.”

An arsonist struck the building, a four-story, 80-room structure, and it burned on May 24, 1964. It had been a landmark at the corner of Fifth and Cherry for more than 50 years.

A few years later, Donita Dyer wrote about the fire in the June 15, 1978 issue of the Brethren Missionary Herald magazine. “‘What men mean for evil, God can use for good,’ our soft-spoken pastor told reporters; ‘They burned our building, but not our faith.’ When asked when his congregation would begin making plans for reconstruction, he answered: ‘A few of us started at 12:04 this morning— when the fire was first discovered.'” (Click here to read the complete article, which is available in the Brethren Digital Archives.)

The fire was also reported in the June 13, 1964 edition of the Brethren Missionary Herald. Click here to read that article.

The church rebuilt at its current location, 36th and Linden, because of building restrictions and lack of space. The new site allowed the church to double its space and expand its educational facilities, according to the 1978 article. Louis Huesmann is the current pastor.