Faith and Science: Can the Two Coexist? 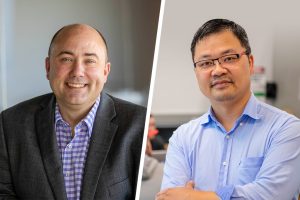 Dr. Joe Frentzel completed his Ph.D. at Michigan State University. He specializes in the study of cyanobacteria, toxin-producing algae, and the conditions responsible for harmful toxin production which negatively impacts the recreational use of waterways across the country. He is a published author: “Chronic zinc deficiency in mice disrupted T cell lymphopoiesis and erythropoiesis while B cell lymphopoiesis and myelopoiesis were maintained,” and the 2016 President’s Award for Excellence in Instruction winner.

Dr. Andrew Zhou is originally from China. He came to the states and completed his Ph.D. in chemistry from Wake Forest University, was a research scientist at the University of Arkansas and an adjunct faculty in chemistry at Northeastern State University. Zhou also has more than 25 publications, including two featured on the cover of journals in the chemistry field.

There has been some exciting news in the greater scientific community recently, can you tell us about it?

Andrew: Sure. Three lithium-ion battery scientists were honored to receive the 2019 Nobel chemistry prize a few days ago. John B. Goodenough, M. Stanley Whittingham, and Akira Yoshino have made significant contributions in conceptualizing and improving lithium-ion batteries. The Nobel Committee believes lithium-ion batteries have “enabled the mobile world” because they are widely used to power portable electronics such as cell phones and laptops. As a chemist, I have been working in the battery fields in recent years and I am very excited to see these contributions were finally recognized. I believe that lithium-ion batteries can find more applications. For instance, they can be used to power electric cars, or provide electricity when power grids fail to deliver electricity. Such power failure happens globally and has affected billions of people. In fact, it happened to Northern Indiana this past May due to a storm.

What was your reaction when you saw who was honored for the Nobel Chemistry Prize? Why is this so significant for you personally?

Andrew: My first reaction was to say “the award is long overdue”. Lithium-ion batteries have been used to power many kinds of portable electronics since 1991. They can also be used to power electric cars and store renewable energy for grid applications. My second reaction was to say “Praise the Lord”. Dr. John Goodenough is one of the three laureates. I attended his seminars a few times in national meetings where people spoke highly of his scientific achievements and personality. I’ve also read his autobiography titled, “Witness to Grace.” In his book, he says that all the “surprises” in his life were from God’s love and grace. His testimony reminds me that my life is also full of God’s grace and it is God’s grace and guidance that brought me to Grace College.

Science and Faith are often viewed at odds with each other in the secular world. How would you refute that train of thought?

Joe: I agree with you that science and faith often seem pitted against one another, but I don’t think that has to be the case if you give fair consideration to both sides.  In reality, the more we discover about the universe, the more obvious it becomes that a thoughtful designer has authored every single aspect of the universe. The complexities are just too detailed to be the product of chance and circumstance.

Andrew: To my understanding, God created science and then transcends science and can not be limited by science. Indeed, many Christian scientists study science to get to know its Creator better. We see that it’s possible through several major players in science. After all, Dr. John Goodenough is called the Father of lithium-ion batteries. Additionally, Michael Faraday and Robert Boyle are both Christians and called the Father of Electricity and the Father of Modern Chemistry.

How do you ensure that the scientific research and the Christian motivation equally hold weight in the programs at Grace?

Joe: This is an important question, but it’s also something I think is unique to the Grace science experience.  Many colleges and universities offer research opportunities, but here at Grace, our perspective is special in that we think our research activities should be used to glorify God and his creation.  Similar to Dr. Goodenough, much of Grace College’s research activities are related to protecting the environment. Having a clear understanding of our motivation for doing science and acting this out by integrating faith in learning helps us to balance both the faith and science components of what we do.

Andrew is new to the science department at Grace. What value does he bring to the table? How do his gifts serve students in unique ways?

Joe: Having Andrew at Grace offers our students the best of both worlds.  We have in Andrew a scientist who is well-published and highly accomplished in his field.  Additionally, Andrew is a man of tremendous faith despite being from China, a country where practicing Christianity comes with serious risks. Now in Winona Lake, students who learn under Andrew will not only gain valuable skills in nanochemistry but also learn what practicing faith looks like from an international perspective.

How would you describe students who fit well into your program?

Joe: Students who want their bachelor’s degree to have a more personal experience where they receive opportunities for one-on-one instruction while learning state of the art chemistry would thrive here in Grace’s chemistry program.  As we saw from the Nobel prize winners’ body of work, nanochemistry has much to offer the world and we’re also eager to make discoveries that help improve the world we live in. – from grace.edu