Faith Through Grieving and Healing 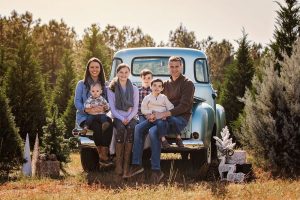 “We’ve embraced the fact that we’ve had these experiences instead of compartmentalizing them and moving on with life. This is a part of who we are now and what God has taken us through,” says Ashley Murray. Ashley and her husband, Jim, live in South Carolina where Jim serves as a Charis Fellowship Chaplain in the U.S. Army.

In September of 2018, The Murrays were confronted with the news that the twins Ashley was carrying were in stage 3 of TTTS (Twin to Twin Transfusion Syndrome). At 24 weeks gestation, Ashley underwent an emergency c-section and delivered two boys, Ethan and Benjamin. Benjamin was given CPR immediately after birth but struggled in the NICU and died shortly after he was born. Ethan survived and spent 120 days in the NICU before coming home to be with his mom, dad, and three older siblings.

In the months following Ethan’s return home, Jim and Ashley’s son, Drew, began to experience seizures, which led to the diagnosis of a brain tumor. Drew was two and a half.

“We had to trust the physicians and the outcome,” says Ashley, “We had to place another one of our children in the Lord’s hands.”

In June of this year, three-year-old Drew was able to undergo surgery to remove the benign tumor.

While in the midst of reorienting a new family dynamic, the Murrays have seen God’s faithfulness and have been given abundant opportunities to share God’s love for their family during their healing process.

In late September, the Murrays were invited to speak at a fundraiser for the Ronald McDonald House where they stayed while Ethan was in the NICU.

“We were able to share the healing power of being connected with other people and also with God” says Ashley, “We wouldn’t have had that opportunity if we hadn’t chosen to be involved during our stay at the NICU.”

The Benjamin bus was completed in 2019 and toured the country. Its final stop was at a pregnancy resource center in Georgia. The Murrays were invited to attend the unveiling.

“We were able to celebrate in the midst of something hard,” says Ashley.

Ethan, born at one pound and fourteen ounces, turned a year old on October 9, and his adjusted age was eight months old. He now weighs 20 pounds and is thriving, learning how to crawl and starting to eat baby food.

Drew recently had a positive follow up appointment with his neurology team and continues to grow healthily and happily. He has been seizure free since his surgery.

“God has been faithful through all of these experiences and he is using different portions to help us minister to others,” says Ashley.

The Murrays are continually putting their trust in the Lord as they move forward in their journey while sharing His love with others in the process.

Editor’s Note: This story first appeared in the Winter 2020 issue of GraceConnect magazine. Click here for your complimentary subscription to this quarterly publication.