Faithful to the Finish 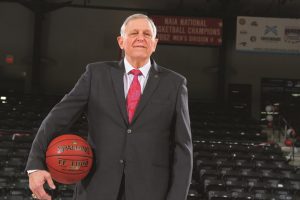 Once a year, he sits down. All alone. In the middle of an empty basketball arena.

Arenas are synonymous with noise, adrenaline and emotion. But in this moment there is none of that. There is quiet; and there is clarity.

In that solitude, he asks himself: “Do I want to keep doing this?”

The answer this year for Grace College men’s basketball head coach Jim Kessler (BS 70) was clear. As he sat alone on Kessler Court in late December 2018, Kessler decided this season would be the last in his legendary 42-year career as head coach. The time had come. “There comes a moment when it’s time,” he said simply. “For me, it’s time.”

Kessler has seen the basketball world transform countless times over the past four decades. His Grace coaching debut in 1977 predates the 3-point line.

He began coaching when players with the last names of Maravich, Malone, Gervin and Walton dominated the landscape. He outlasted players like Magic, Bird, Jordan and Bryant. And he will end his career in the midst of LeBron, Durant and Curry.

One of the main reasons Kessler realized it was time was simply age. He recalled, whether in jest or not, watching film of his team and wondering who the old man near Grace’s bench was. “Coaching is so demanding physically. It’s easy to coach too long without realizing it,” Kessler said.

Kessler ended his career with 788 victories after his team competed in the NCCAA Championship tournament in March 2019. Kessler has led the Lancers to 10 conference championships and has directed the Lancers for the entirety of his collegiate coaching career. Kessler began in 1977, and his run of five decades coaching Grace were rewarded with Hall of Fame inductions by the NAIA and NCCAA. His teams qualified for 19 national tournaments, and in 1992 Kessler guided Grace to the NAIA national championship, the lone NAIA title in school history. Capping off his career awards, Kessler received the Northeast Indiana FCA’s first Coach’s Impact Award, which is given to a coach who engages in “three-dimensional coaching” to impact the mind, body and spirit.

But lining the walls of Kessler’s office aren’t his Coach of the Year awards or NAIA national championship memorabilia. Rather, they display every one of Kessler’s team photos, making blank wall space in his office a rare commodity.

For Kessler, developing his players into young men of character and faith has always been central. He is quick to diminish any awards or accomplishments he has received — and there are plenty of them.

Instead, he wants his legacy to reflect his eternal goals. Through tearfilled eyes he remembered a saying his father kept written on a piece of paper: “Only one life, ‘twill soon be past, only what’s done for Christ will last.”

“I don’t care how good you are as a player or coach, you’ll be forgotten over time,” Kessler said. “Your true legacy lives on through the people you’ve impacted. That’s good enough for me.”

Over the years, Kessler has not shied away from sharing duties with his assistants. But no assistant was ever given what Kessler referred to as the “final test.”

Scott Moore (BS 08), a former Lancer and longtime assistant coach under Kessler, was given that final test last summer. Moore took Grace’s team by himself on an overseas mission trip to France. When the trip went well, according to Kessler, Moore passed his test. Moore was named Kessler’s replacement on Feb. 18, a fitting handoff to the helm of the Lancers.

“I’ve often thought that if you do your job well, you should be able to slip out the door and nobody knows you’re gone,” Kessler said. “In a relay race, you run your part and then pass the baton. It’s Scott’s turn now, and I know he will do a great job.”

As part of the transition, Kessler will move to a new role on campus. He will serve as the special assistant to the athletic director, aiding the athletic department and the alumni office with campus relations.

“I have run hard and done my best to finish strong, and I am so thankful that Grace College has supported me in this decision,” Kessler said. “I cannot thank my Lord enough for allowing Susanne (BS 92) and me the joy of pursuing a career of coaching and teaching. Few men are so blessed to get paid to do what they thoroughly enjoy. I pray that my career can best be summed up with my life verse in Philippians 3:14 (ESV). ‘I press on toward the goal for the prize of the upward call of God in Christ Jesus.’” – from grace.edu