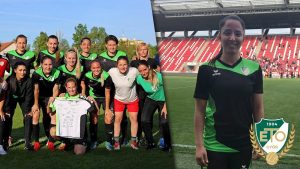 Faria played for ETO FC Győr in the top division of Hungarian soccer (NB I). The squad finished sixth in the standings for the season.

ETO FC Győr plays in the 15,600-seat ETO Park in Győr, Hungary. Faria joined the team midway through the season. She started in six of the nine matches in which she was available to play.

Faria, who played at Grace from 2016-18, helped the Lady Lancers to their first 20-win season in program history as a senior. Grace won the Crossroads League championship in 2018 and hosted an Opening Round match at NAIA Nationals.

“My time at Grace was one of the most impactful times of my entire life. I grew spiritually, academically, athletically and mentally,” Faria said. “The coaching staff at Grace helped me not only to develop my soccer skills but also my faith and my desire to grow in my life. As I look back on my career, I feel blessed, joyful and thankful. They taught me how to play soccer for Christ and not for my own glory.”