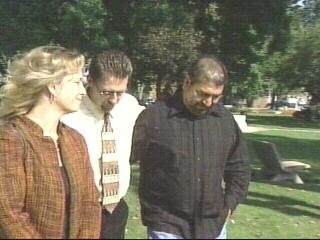 Angelica Alvarez was sentenced to life without parole for killing her four children. Gonzalo Lopez (right), the father of the eldest two children, walks outside the courthouse with his pastor, Brian Baughman (center). Baughman is pastor of Hispanic ministries at the Osceola (IN) Grace Brethren Church (Greg Serafino, pastor). (WSBT photo)

A judge sentenced Alvarez to life without parole.

Alvarez admits she strangled her children, ranging in age from two to eight, last November in the basement of their Elkhart home.

Both fathers say they forgive Alvarez and agree with the sentence, but it doesn’t make the loss of their children any easier.

Angelica Alvarez cried as she told Judge Terry Schumacher she takes full responsibility for what she did.

“She’s a rather religious person, which again may seem quite contrary to what she did in this case, but she is,” said Juan Garcia, Alvarez’s defense attorney. “She’s made peace with God, and she’s quite repentant.”

The fathers of her children believe those feelings of remorse make it much easier for them to forgive her.

The father of the eldest children — Gonzalo Lopez — spoke in court.

He spoke to us through a translator — his pastor, Brian Baughman.

“We’re moving forward little by little and it’s a very hard road because it’s not easy,” Lopez told WSBT News. “It’s not easy for someone as a father to lose two children.”

Alvarez previously said she killed the two children by drugging them and strangling them. But Elkhart County Prosecutor Curtis Hill introduced evidence that may contradict that.

Toxicology reports showed the children didn’t have any drugs in their system at all.

Hill showed pictures of a ladder and utility cord tied like a noose. Both were found at the crime scene.

He also showed a picture of one of the children with cord marks around the neck.

“Given the circumstances that we found in this particular scene, given the injuries that we located, certainly that cord and that ladder played a part in what occurred with those children,” explained Hill.

That evidence made this already emotional day even more so.

“That certainly made us rewind the tape in our minds and just remember seeing their faces, and their smiles, their hugs, and the joy and the fullness of life that was really inside all four of those precious little kids,” Baughman said.

“I’m always going to have the children in my heart, and there’s no way to take that out of my heart or out of my mind,” Lopez said.

The fathers say faith has helped them get through this painful time in their lives, and it is that faith that also helps them to forgive, and hope Alvarez will find peace.

Alvarez will spend the rest of her life in state prison, without the possibility of parole.

She does have the right to appeal, but that is unlikely.