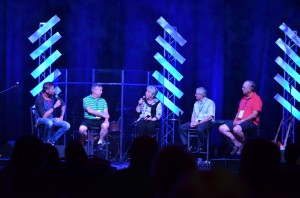 “Fellowshifting is not a one-time event,” said Bartley Sawatsky, executive director of the Fellowship of Grace Brethren Churches (FGBC) as he opened the 2014 national conference Thursday evening at the Omni Shoreham Hotel in Washington, D.C.

He began his talk comparing the FGBC to a starfish – a creature that does not have a head and leadership can come from anywhere. An arm can be cut off and it will grow another one.

“The biggest threat to the starfish is the wrong culture,” he said, noting that it can be impacted by its surroundings. He encouraged the audience to consider creating a culture for movement in the FGBC.

He detailed four actions that he believes will help create that culture: celebrate, collaborate, capitalize, and commemorate. These were concepts that came to light after consulting with FGBC leadership and pastors over the last year. He stressed that we could cheer one another on, encourage people to share their ideas, direct resources to groups that are bringing about transformation, and give honor to our “tribe’s” history, belief, and practices.

“The beauty of a fellowship is its diversity,” he said. He also stressed the importance of respecting our roots. “We’ve got good roots,” he added. 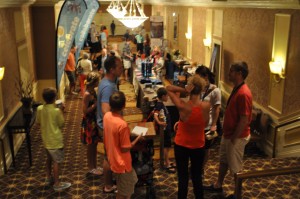 Conference delegates gather outside the ballroom where national conference is being held.

He compared and contrasted what he termed the “first fellowshift” – when the early church in Acts expanded from just the Jews to the Gentiles. He also noted the “establishment” and “movement” styles of Peter and Paul. “Both roles are extremely important,” he emphasized.

“We are the progressive Brethren,” he said, stressing that the Grace Brethren were among those who wanted to engage the culture and change practice to reach people for Christ in the late 1800s. “Shifting is in our DNA.”

Sawatsky’s talk was at the end of the first session that included worship music led by Jeremy Byng, of Grace Community Church, Goshen, Ind. (Jim Brown, pastor), and Scott Avey, of Grace Community Church, Frederick, Md. (R. Greene, pastor). Also on the program were videos of various ministries, a panel that shared stories of previous conferences, and a fun doughnut eating contest between three generations.

Friday’s session kicks off with the first sponsored meal. The staff of GBCanada will share their ministry over an early morning breakfast. The morning celebration will include Mark Artrip, pastor of Movement Church, Hilliard, Ohio, who will talk about “Three Values Our Fellowship Needs to Leverage.” The evening session will include talks from Sarah Knepper, a member of the church planting team at Movement Church, and Gerardo Leiton, pastor of Iglesia Comunal Cristiana, Tampa, Fla.

Also on Friday are sponsored meals by CE National and the Grace Brethren Investment Foundation, along with the meetings of the Association of Grace Brethren Ministers and Women of Grace USA. Friday evening concludes with a concert by comedian Michael Jr.

Additional photos from Thursday night may be viewed on the GraceConnect Facebook page.