‘FGBC World’ Arriving — Copy You Can Use 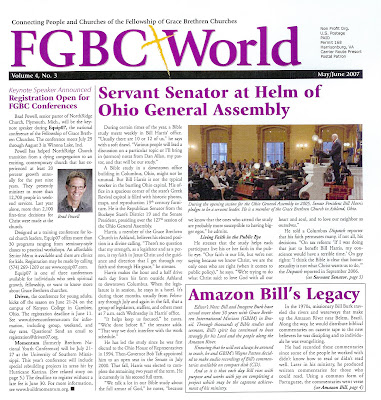 The May/June, 2007, issue of FGBC World is currently arriving in homes and churches. This free, bi-monthly periodical is the only all-Fellowship publication of the Fellowship of Grace Brethren Churches (FGBC). It is published by the Brethren Missionary Herald Co. to inform and connect the people and churches of the FGBC.

For your convenient use in church bulletins, newsletters, websites, powerpoint announcements and other venues, promotional copy is attached. Please share this with your church staff and others who can use it to promote this issue’s availability.

Ohio State Senator Bill Harris, a member of one of our northern Ohio Grace Brethren churches, believes his elected position is a divine calling. As state senate president, he’s found that following Christ’s example of servant leadership is an effective guiding principle. Read more about it in the May/June issue of FGBC World, which is available at INSERT LOCATION.

Thirty years ago, Grace Brethren missionary “Amazon” Bill Burk used cassette tapes to help disciple and evangelize new believers in Brazil. Now he and Wayne Patton, a Grace Brethren International Missions teammate, have joined together to re-produce the work using today’s compact disk technology. Read more about it in the May/June issue of FGBC World, which is now available at INSERT LOCATION.

Pastor Bob Greenwood from Souderton, Pa., began collecting tobacco tins in memory of his grandfather. Now he houses a complete turn-of-the-20th-century general store in his basement. The admission fee? A Bible. Read more about it in the May/June issue of FGBC World, which is available at INSERT LOCATION.

Since the Grace Brethren Missionary Residence in Winona Lake, Indiana, opened in 1980, it has hosted more than 5,000 missionary guests and it shows. This spring, the facility is getting a facelift as part of an effort to make it a more comfortable place to stay. Read more about it in the May/June issue of FGBC World, which is available at INSERT LOCATION.

Following World War II, hundreds of missionaries wanted to return to their mission points, but reduced number of ships for travel made it difficult. Ben and Mabel Hamilton found their way to the Central African Republic as the result of her friendship with Helen Lemmel, author of the hymn Turn Your Eyes Upon Jesus. Read more about it in the May/June issue of FGBC World, which is available at INSERT LOCATION.